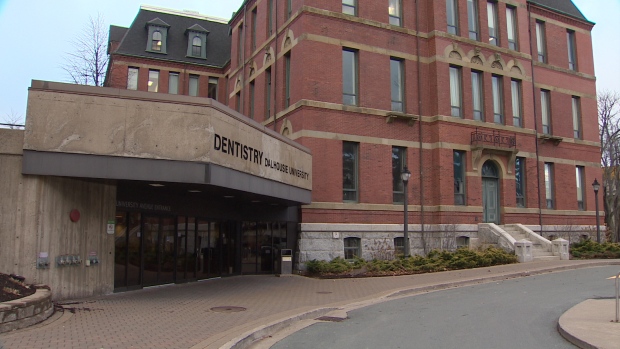 By Alison Auld, The Canadian Press
Halifax: A member of a Facebook group accused of posting hateful comments about female members of Dalhousie University’s dentistry school blew the whistle on the classmates who made the remarks but has been treated unfairly by the school, the man’s lawyer said Monday.
Bruce MacIntosh is representing Ryan Millet, a fourth-year dentistry student and one of the 13 members of the now defunct Class of DDS 2015 Gentlemen on Facebook group.
MacIntosh said in a statement provided to The Canadian Press that Millet took a stand against posts he deemed offensive and encouraged other group members to remove them, but was sanctioned by Dalhousie University soon after the comments came to light in December.
“Like his 12 classmates, Ryan has been publicly pilloried and secretly convicted, without due process or the right to be heard,” MacIntosh said.
“He is neither hateful nor disrespectful towards his female classmates. He does not defend the unacceptable comments that were made on Facebook. … He was the one who blew the whistle on those comments.”
MacIntosh contends that Millet, a married father of three young children, took a “vocal stand” against misogynistic posts on the Facebook page. He said he forced the removal of some Facebook entries he found disrespectful, but offered no other details. MacIntosh said his client also informed a woman in the posts about them and faculty was notified.
Millet will go before a disciplinary hearing Tuesday to argue for the return of his clinic privileges that were suspended after the posts went public. MacIntosh said one of the female class members who was targeted in a “hateful Facebook poll” will also provide the committee with a letter in support of Millet.
According to the CBC, members of the Facebook group voted on which woman they’d like to have “hate” sex with and joked about using chloroform on women. The CBC said in another post, a woman is shown in a bikini with a caption that says, “Bang until stress is relieved or unconscious (girl).”
The Facebook page has been taken down.
The 13 students who were part of the Facebook group have been ordered to attend classes apart from the class and are suspended from clinical duties, which could affect their ability to graduate.
Dalhousie University has announced an independent task force will look into what happened and a restorative justice process will hear from those involved. Fourteen women and all of the 13 men in the group, except Millet, will take part in the restorative justice process.
But MacIntosh criticized the way the school handled the matter, saying the students were pushed into accepting it without due diligence and a proper investigation by Dalhousie University to identify which members were active on the site.
“No one stopped to interview the victims, or the alleged perpetrators, to determine which students were truly culpable,” he said.
“Instead, a cloak of unprofessional misconduct was conveniently cast over all Facebook members. Then, both perpetrators and victims alike were prematurely enticed into a restorative justice system which started with acceptance of guilt.”
MacIntosh said the university should have looked into who posted the comments and given them an interim suspension, while allowing the other students to carry on with their studies and exams.
“Like the wild west, it became shoot first and ask questions later. My client, and others in his class of both genders, became collateral damage,” he said.
In an email, a spokesman for Dalhousie University did not address MacIntosh’s criticisms about the school’s handling of the matter. But Brian Leadbetter said the university will continue to evaluate each man’s individual case as they proceed through the academic standards class committee.
“We are committed to a just process,” Leadbetter said. “The process will comply with the law and university policies, and respect the rights of those involved. Much of the work under the policies involved is confidential, to ensure that we respect the privacy of all students involved.”
MacIntosh said neither he or Millet would discuss the matter before Tuesday’s hearing.
In a video interview with the Halifax Chronicle Herald, Millet said the Facebook page was created in the first few weeks of school in 2011 and that someone added him to the group. He said most of the early posts were harmless, but took a “shocking” turn when the content became sexually violent.
“There were a few of us in the group who were immediately, ‘Whoa,’ shock factor, very upset, disturbed by the post,” he said, seated beside his lawyer. “We honestly felt like the guys who posted it would come to their senses within minutes and realize like this is way too far.”