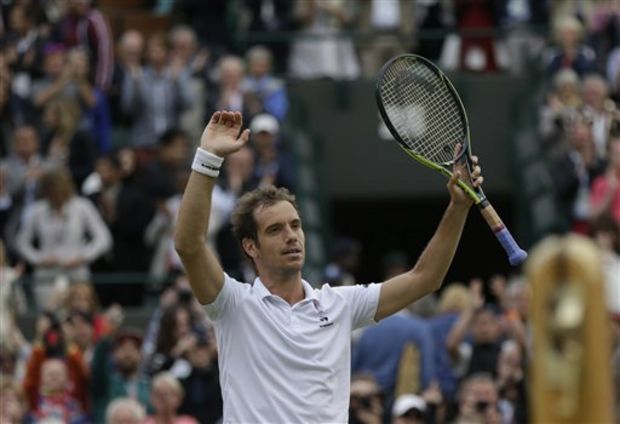 London, July 9 (IANS/EFE) Frenchman Richard Gasquet upset Swiss No. 4 seed Stanislas Wawrinka 6-4, 4-6, 3-6, 6-4, 11-9 here to reach the Wimbledon semi-finals for the second time in his career.
In a clash pitting two players best known for their powerful and stylish one-handed backhands, Gasquet proved to be more solid and consistent than the reigning French Open champion, who committed double the number of unforced errors (48 to 24) over the course of the three-hour, 28-minute contest on Wednesday.
“It was a really tough match,” a spent-looking Gasquet said immediately afterward, recalling that he had a chance to serve out the match earlier in the fifth set but that Wawrinka “never stopped fighting”.
“It was a great match, very important for me,” the 21st seed said, noting that it would have been difficult to swallow if the Swiss player had pulled off the comeback.
Wawrinka fell short in his bid to reach his first Wimbledon semi-final despite hitting 22 aces to Gasquet’s six and 73 winners to the Frenchman’s 46.
Next up for Gasquet in Friday’s semi-finals will be Serbian world No. 1 and defending champion Novak Djokovic, who cruised to a 6-4, 6-4, 6-4 victory over Croatia’s Marin Cilic on Wednesday in less than two hours.
“He’s the favorite … he’s the best in the world. I’ll try to play to like I did today. He beat me (at this year’s) Roland Garros but I hope to get revenge on Friday,” Gasquet said.
The Frenchman also reached the Wimbledon final in 2007, losing to eventual champion Roger Federer of Switzerland.
The second-seeded Federer and Scotland’s Andy Murray, the No. 3 seed, also won their matches on Wednesday over France’s Gilles Simon and Canada’s Vasek Pospisil, respectively, to set up a blockbuster semi-final showdown on Friday.