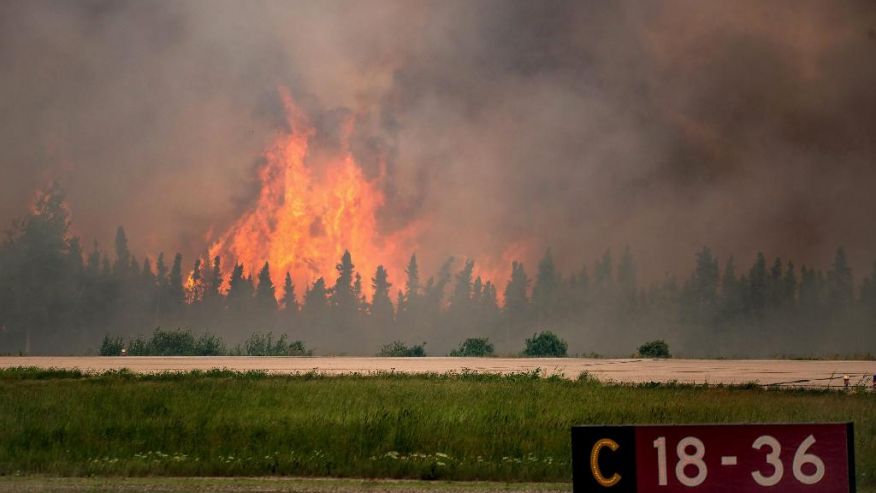 By Nicholas K. Geranios, THE ASSOCIATED PRESS
SPOKANE, Washington: Large wildfires raging across Canada have contributed to a smoky haze lingering above the Western U.S., blazes fueled by the familiar hot, dry conditions that have turned much of the region into a tinderbox.
The smoke has caused spectacular red sunsets in places including Seattle and prompted air quality warnings in many states.
FIERY CANADA
Blazes are burning in parts of British Columbia, Alberta and Saskatchewan.
In Saskatchewan, more than 10,000 people have been forced from their homes, and the Canadian Interagency Forest Fire Centre, which co-ordinates firefighting services for the provinces and territories, said more help from the U.S. and abroad could be necessary.
Alberta said Wednesday it was bringing in 62 firefighters from Mexico to help battle 92 wildfires burning in the province, including 33 listed as out of control.
British Columbia, with more than 180 fires, was bringing in crews from Australia.
SMOKE SOUTH OF THE BORDER
Haze that lingered over parts of eastern Colorado for three days was rapidly dissipating Thursday.
The smoky conditions had prompted a health warning for the Denver area Wednesday and combined with clouds to cast unusually gloomy skies that blocked mountain views.
The tiny particles of wildfire debris in the air pose a health risk for people with lung disease, older adults and children and anyone who exerts themselves outdoors, said Christopher Dann of Colorado’s air pollution control division.
He said Colorado _ which remains free of large wildfires after a wet spring _ could be again dealing with smoke from the Canadian fires over the coming days and weeks depending on weather and the progress of firefighters.
Joanne Todd of the Puget Sound Clean Air Agency said smoke from wildfires in British Columbia has crossed into Washington state, but is sitting high in the atmosphere and has little impact on the health of residents. “It’s not affecting us at ground level,” Todd said.
She said, however, that could change in the future.
Air quality advisories have also been issued in North and South Dakota.
Canadians, obviously, have been affected as well. Environment Canada continued to issue special air quality advisories for parts of British Columbia, Saskatchewan, Manitoba and northwest Ontario due to wildfire smoke.
HOT AND DRY
Western Canada has seen very hot, dry and windy conditions.
Kerry Anderson, a research scientist with the Canadian Forest Service, said the weather pattern known as El Nino, which is caused by the warming of the Pacific Ocean off the coast of South America, is responsible.
He expects weather conditions will settle down in Saskatchewan in the coming weeks, but warmer than normal temperatures will likely persist for a while in B.C. and Alberta.
Anderson said even if crews bring the Saskatchewan fires under control, they may not actually be put out until the fall.
Similar conditions across the American West have helped fuel for large, destructive blazes, including one in Wenatchee, Washington, that began in late June that destroyed nearly 30 homes.
___
Associated Press reporters Colleen Slevin in Denver contributed to this report.