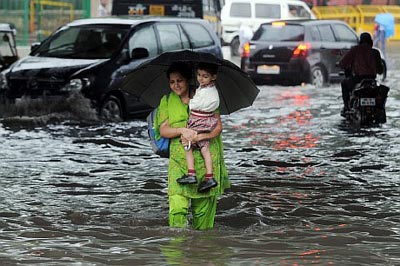 New Delhi, July 10 (IANS) Heavy rain in the national capital on Friday threw normal life out of gear and crippled traffic, exposing ill-preparedness of the city government and civic bodies in tackling monsoon woes.
After early morning showers, frequent spells of rains gave nightmare to motorists who crawled on the flooded roads. Arterial roads were choked too.
In several residential colonies, drains were reportedly chocked and roads caved in. Vast areas in east Delhi virtually went under water. In many residential colonies in south Delhi, people were seen wading through knee-deep waters.
The BJP and the Congress slammed the Aam Aadmi Party government for its failure in tackling the issue. The Delhi government pleaded helpless, saying it cannot fix the city’s drainage system overnight which was faulty for years.
Successive governments in Delhi have miserably failed to address water-logging problems during monsoon. Multiplicity of authority was another reason for the mess with the city government and civic agencies passing the buck.
The city recorded 1.2 millimeter rainfall which brought down the temperature to two notches below average at 33.4 degrees Celsius. The minimum temperature also settled two notches below average at 25.2 degrees Celsius.
The met department predicted rains on Saturday.
“We received over 15 calls regarding water logging till 4 p.m. Most of them have been attended and trucks and pumps have been sent to pump out the water,” said an official of the South Delhi Municipal Corporation control room.
Similar problems were reported from north Delhi areas too.
Delhi Traffic Police reported traffic jams from many parts of the city, including Mahipalpur near the Indira Gandhi International Airport and ITO junction in the heart of the capital.
The showers brought relief from Thursday’s muggy weather. “I hope the weather stays pleasant over the weekend as well,” said Rupam Malhotra, a resident of west Delhi.
“Delhi’s water drainage system is poor. There are about 160 spots in Delhi which are prone to water logging. I had called meetings of officials to tackle pump out the water,” Delhi’s Public Works Department Minister Satyendra Jain said.
“It is beyond my control to fix the water drainage system immediately, but we have given a centralised helpline number 1800118595.”
“Delhi Jal Board was responsible for the chocking sewer lines as it had not performed its work properly,” Bharatiya Janata Party leader Praveen Shanker Kapoor said.
Congress leader Sharmistha Mukherjee said the mess had exposed the lies of the AAP government.