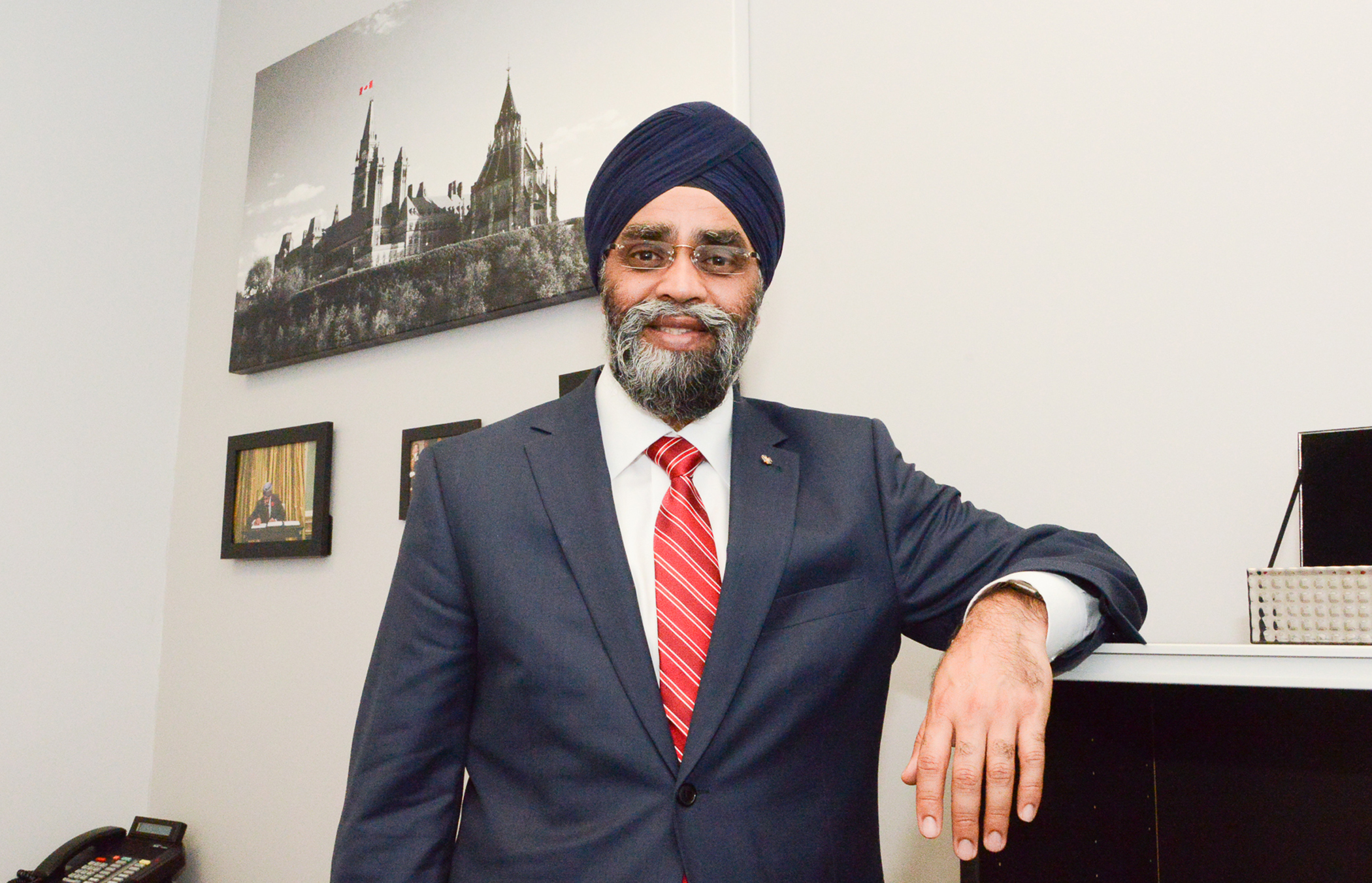 Harjit Sajjan grew up in south Vancouver, the neighbourhood he would later police as a VPD Officer, and represent as its Member of Parliament. He has accomplished an enormous amount in the service of Canada, retiring from the Canadian Armed Forces as a Lieutenant-Colonel, he was deployed to Bosnia-Herzegovina and served three separate deployments to Kandahar, Afghanistan. He received numerous recognitions for his service, including the Meritorious Service Medal for reducing the Taliban’s influence in Kandahar Province, and the Order of Military Merit, one of the military’s highest recognitions. He also served as an Aide-de-Camp to Iona Campagnolo and Stephen Pointe, both Lieutenants-Governor of British Columbia. In the last federal election Harjit Sajjan was elected MP for Vancouver South, and appointed to the Trudeau cabinet as the Minister of Defense. He spoke with Ray Hudson at his office on Victoria Street.

Ray Hudson: What attracted you to politics?

Harjit Sajjan: Early on in life I made a conscious choice, and it may sound tacky but, my goal was to make a difference. I was able to do the policing in the military because I had the skill set and I offered it up. When I had the opportunity for politics, it was just that. I was reaching a peak of what I could do in making a difference, and this opened up the realm for me where one could make high level policy decisions to make a difference in people’s lives. When I met Justin Trudeau, the leader of the third party at that time, he was the same type of person who wanted to make a difference. We hit it off quite well and when I decided to run, it wasn’t because we were about to form the government. He wanted to make a difference and he was building a team of people who wanted the same thing. You need a good boss who allows you to do the work, and you need a good team to accomplish it. That’s what he was doing. It didn’t matter whether we were going to win or not, I knew I was part of the team, and whether I was in the police or the military I’ve always had that mentality.

Ray Hudson: How did you find the transition from the rather structured environments of military and policing, to political life?

Harjit Sajjan: Even though you saw me in a uniform, which was structured, I did things in an unstructured way. I was successful in the military, even in Afghanistan, because I didn’t take a military approach. There are always certain laws rules that you have to follow obviously, but when it comes to solutions, first you need to figure out what’s going on, and once you have a good understanding of that first, the solution comes from within. That’s the same way I approached the change of our role in Iraq. The Prime Minister gave me full leeway to come up with the recommendations, which were ultimately approved.

Ray Hudson:  How are you able to be Defense Minister and look after your constituency?

Harjit Sajjan: To be honest, I look at myself as a Member of Parliament first.  When I decided to run, I had never been in politics before so I had to learn everything.  I read everything I could on the Elections Canada website, all the financial rules, and then looked at what our democracy is about: Canadians selecting one Canadian out of a geographical area to represent them. Honestly I saw the greatest honour someone could bestow on another Canadian, was to give the candidate their vote. I never campaigned with an attitude of ‘don’t vote for the other person.’  I just went out to introduce myself, let them know who I am, what I have done, why I joined the Liberal Party and what I want to do and accomplish. The message I left at the door was, I grew up in this riding, I served my country, and I was a police officer and I policed in this riding. Those are facts to say, find me a person who knows this riding better.
After we formed the government, I wasn’t expecting to be a minister, let alone the Minister of Defense. I knew it was a big responsibility and I knew it would take some time away, but never has there been somebody who grew up here, been elected as MP, and given such great responsibility. I think a lot of my constituents understand that.
I’m here as much as I can be, and already we’ve been able to make a difference. For example, the Sumer Job Program: I’ve brought $750 thousand into our riding for hiring students this summer.  That’s a big deal right?  My staff does phenomenal work with direct access to the various departments to be able to solve some of the problems my constituents come in with. I am cognizant that I’m away a lot, but even still, I want to make sure that every single file is serviced well.

Ray Hudson: What are the primary local issues?

Harjit Sajjan: It’s about the middle class and it’s about families. I got excited because a police officer knows this. You go knock on a door, it’s individual families that are impacted. And it’s the couple who are raising young kids, and possibly looking after their parents. We have to be respectful of our elders, our seniors, to make sure they have everything they need such as transportation on transit to community centres. We’re working very hard right now with the funding that was approved by the previous government for Killarney, but I’m also working very hard for another Seniors Centre at Sunset (community centre).  Seniors don’t have the opportunity to travel great distances, so there’s a plan in the works for a Seniors Centre at Sunset. Then how do you combine some of the challenges to make it easier on families? When the grandparents go to the Seniors Centre, it will be connected to a community centre where the kids can play, so both can have an easier time.
It’s about making it easier on families to move ahead.  Now with the tax free Child Benefit cheque that’s going to be coming, it’s going to have a massive impact on families. Especially when you look at the average wage in this riding.
When you package all this together, it’s putting a greater emphasis on youth. If we focus on helping the teachers and the schools with mentorship as the youth move forward, you’re going to be able to create better citizens, and automatically you’re going to have the students succeed in their own way regardless of what that success might be.  The problems that we face now will slowly start diminishing whether it’s crime, drugs, or gangs.
That’s my goal.  The family unit at home has to work well, because if it doesn’t, everything will fall apart. As a police officer I’ve seen this. But when that works well, we can put greater emphasis on the youth so the future can be a lot brighter.
For those in post secondary training, we’re addressing the issue of large student debt in the recent budget, where low income students, who graduate, can defer their student loan payments until they make more than $25,000 a year. We’re also providing a 50-per-cent increase to federal grants from $2,000 to $3,000, for low-income students. Middle-income students will see an increase from $800 to $1,200. This should make it easier for people coming out of school and can get on their feet first. This is a big deal, whether it’s trades or a university degree.
Currently I’m focusing on our three high schools.  I was at John Oliver speaking with the Boys Club, At Risk Youth, there. I’m going to the Killarney graduation tomorrow, and my goal is to move my focus down to the grade eight to tens. Anybody in policing or teaching knows grade eight is a critical time. As youngsters move from grade seven to grade eight they become a small fish in a big pond. This is when we need to keep their confidence level up, because this is when the gang recruitment starts, when those challenges with drugs come in. When they hit that time frame, then we help them to do grade ten because if they don’t get it right by that time, those last two years, when they have to kick it into gear, determines what they’re going to do afterwards.

I look on my election as having been given a precious opportunity right now, by my riding, and by the Prime Minister.  But this is temporary. I’ve got to make the best of this so I can serve Canada, and at the end of the day, as long as I can look myself in the mirror and say ‘you’ve made the right choice’ I’m good. Remember, my main goal is to make a difference. I will always move in that path.