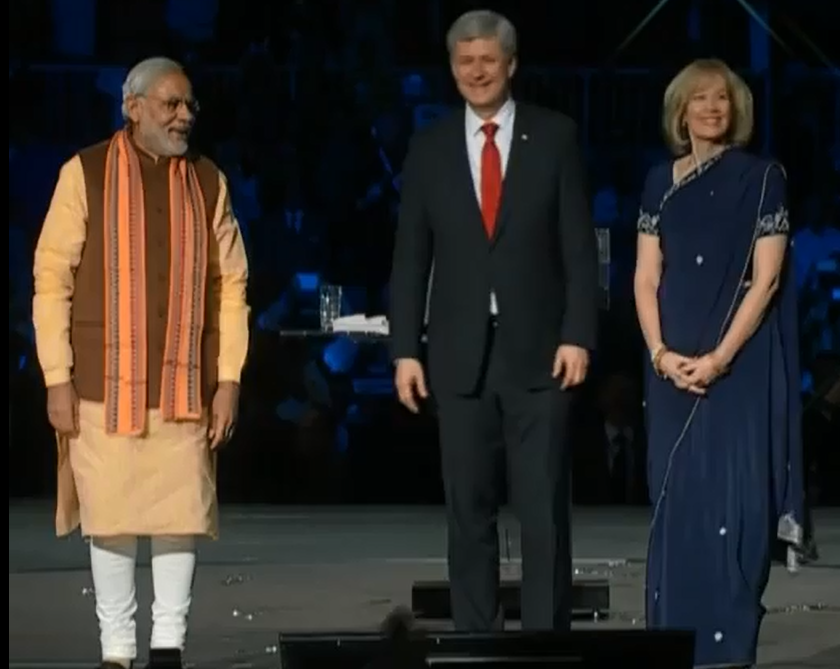 TORONTO: Thousands chanted “Modi, Modi” to welcome Narendra Modi to Toronto on Wednesday night as the Indian prime minister made his first visit to Canada.
On a day in which he announced the relationship between India and Canada was now back on track and signed several agreements, Modi spoke to an enthusiastic crowd in an arena.
Despite turning those without tickets away, there were empty seats in the Ricoh Coliseum as Prime Minister Stephen Harper introduced Modi to the cheers of the crowd.
Near the arena, a group of about 150 protesters called for Modi’s prosecution, calling him an extremist Hindu nationalist with blood on his hands from his time as chief minister of Gujarat state.
They were in a courtroom earlier Wednesday but failed to launch a private prosecution of the Indian leader after the attorney general last week decided against taking any action. 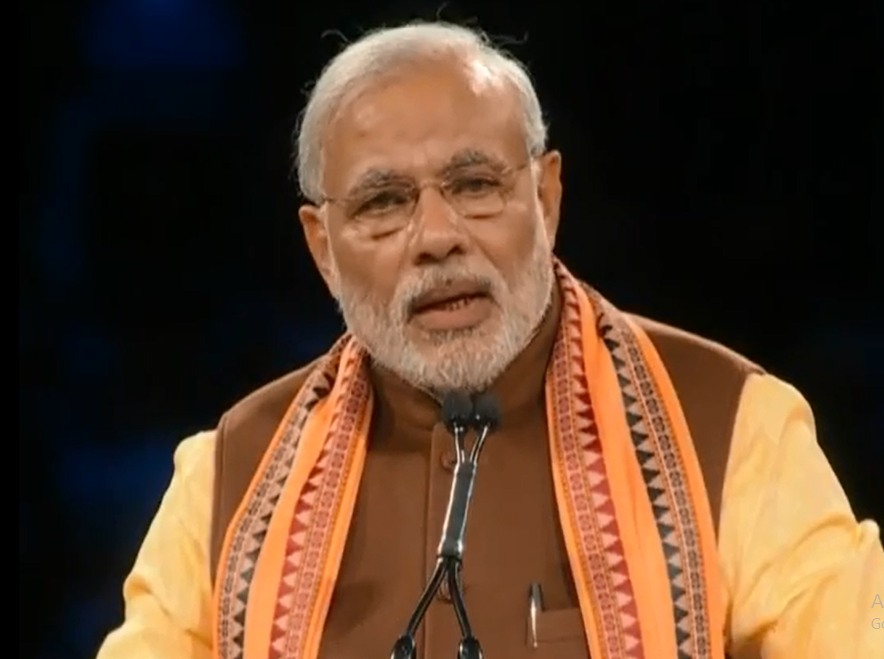 Sikh advocacy groups allege his “acts and omissions” resulted in a massacre of Muslims in his state in 2002.
The groups’ lawyer, Marlys Edwardh, said in a statement there were reasonable and probable grounds to believe that Modi engaged in the crimes.
Jatinder Grewal, a spokesman for Sikhs for Justice, said after a seven-hour court session Wednesday the justice of the peace agreed there was enough evidence to continue with a private prosecution against Modi, but the Crown declined to proceed.
A few hours earlier, Modi and Harper waved from the plane to about 150 cheering supporters assembled on the tarmac at Pearson International as they arrived from Ottawa. A group of traditional dancers provided part of the colourful welcome.
In Ottawa, the two leaders agreed the signed agreements were just a first step toward deepening economic ties, and that the relationship between the two countries hadn’t yet lived up to its potential.
“Canada is a major Asia-Pacific power and should play a more active role, including in regional institutions,” Modi said.
Harper agreed: “It’s not where we want it to be, but it is growing.”
One agreement Modi signed _ valued at hundreds of millions of dollars _ was a deal to buy more than 3,000 tonnes of Saskatchewan uranium to fuel India’s power reactors.
Saskatchewan Premier Brad Wall, who was on hand for the announcement, said the deal would be a boon for his province.
“For an employer of 4,000 people in the province _ 45 per cent of them First Nations and Metis _ it’s a great day for Saskatchewan.”
The contract with Cameco Corp. (TSX:CCO) was one of a number of agreements announced after Harper welcomed Modi to Parliament Hill amid full military honours, including a 19-gun salute.
The deals included pledges to co-operate in the areas of civil aviation, railway transportation and education and skills development, as well as space, social security and maternal, newborn and child health.
Modi praised Harper for improving relations between the two countries, saying they had drifted for a while, but are now back on track.
“I am conscious of the significance of this visit in the history of our relations,” he said. “I have come at a time when the importance of this relationship for our two countries has never been stronger.
“Canada has the potential to be a key partner in every area of India’s national development strategy.”
It is the first bilateral visit to Canada by an Indian prime minister since Indira Gandhi was hosted in 1973 by then-prime minister Pierre Trudeau.
Modi began the day by meeting Gov. Gen. David Johnston at Rideau Hall before a full honour guard and the din of howitzer fire greeted him in the shadow of the Centre Block, where Harper ushered him in for a face-to-face meeting.
Handfuls of supporters chanted Modi’s name as he arrived on the Hill.
“He’s a rock star,” said Ravi Desai, an international student and IT worker from India who lives in Ottawa.
“He’s putting aside a lot of traditional things that other governments used to do and he’s focusing on technology, and that’s what (the youth of India) need,” he said.
Modi’s next stop is Vancouver, where he will be accompanied by Harper and no fewer than 16 fellow Conservatives scheduled to appear with them at various events.
With files from Mike Blanchfield in Ottawa and Liam Casey in Toronto