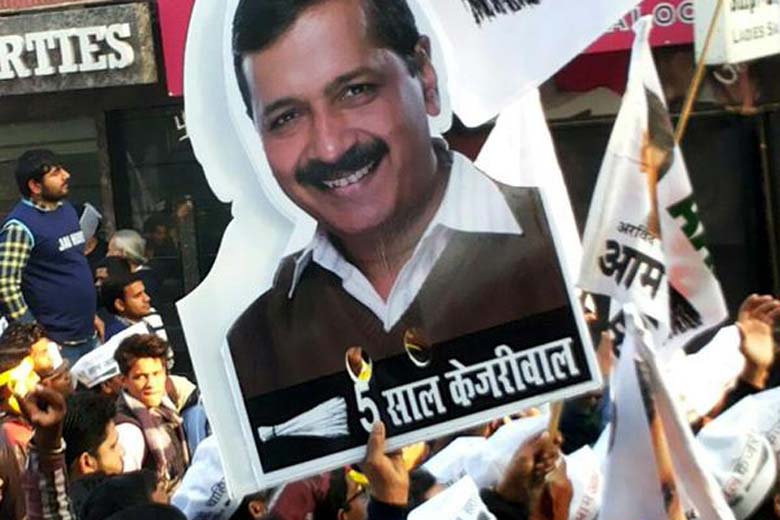 Election officials counting the millions of votes polled Saturday said the Aam Aadmi Party was set to win more than 50 of the 70 seats in the Delhi assembly, with a staggering vote share of at least 52 percent.

“We are confident of crossing the 50-seat mark,” AAP leader Yogendra Yadav told the media.

“The storm in Delhi (in favour of the AAP) has translated into victory,” he added.

The BJP was forging ahead in just a dozen seats, far less than the 31 it won in December 2013.

The Congress, which was reduced to eight seats last time, was headed for a rout.

The AAP swept all across the capital, including both in the middle class areas and low income neighbourhoods, virtually decimating the Bharatiya Janata Party.

“We congratulate Kejriwal,” BJP spokesman Sambit Patra told the media. “They have won, and won handsomely. We cannot doubt that.”

Kejriwal was set for victory in his New Delhi constituency, where he created history in 2013 by defeating three-time chief minister Sheila Dikshit.

Most AAP leaders forged ahead of the BJP and Congress by comfortable margins.

These included Somnath Bharti, Manish Sisodia and Rakhi Birla, who were ministers in the earlier Kejriwal government.

Exit polls have predicted a big win for the AAP, which ruled Delhi for 49 days until Kejriwal resigned as chief minister in February 2014.

Over 67 percent of the 13.3 million electorate voted Saturday.