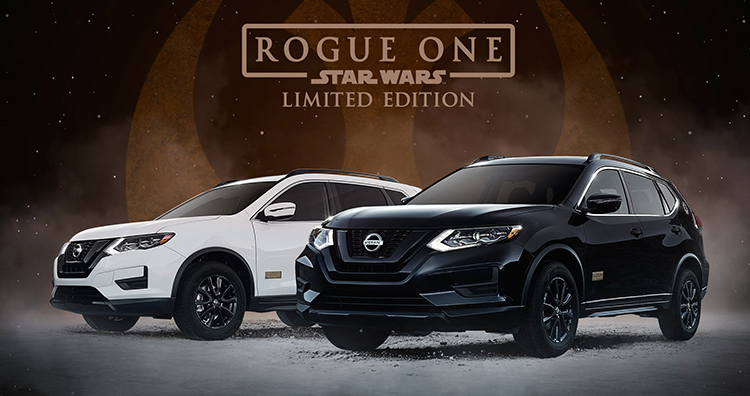 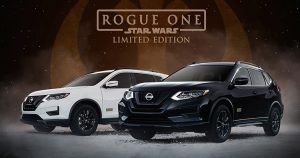 Nissan Canada announced the launch of its new promotional campaign in support of the upcoming film “Rogue One: A Star Wars Story.” The newly revised 2017 Nissan Rogue compact SUV is the centrepiece of the fully-integrated campaign that features Star Wars-themed TV ads, social and experiential content.

As one of five global brands joining with Lucasfilm to launch promotional campaigns for the first-ever standalone Star Wars story, Nissan also debuted at a numbered, limited-edition, full-sized-replica Death Trooper helmet that comes with purchase of the previously announced 2017 Nissan Rogue: Rogue One Star Wars Limited Edition vehicle. For a premium price, the Rogue One version adds gloss black exterior trim, black roof rails, and a clear rear-bumper protector wearing a Star Wars logo. It also includes Galactic Empire and Rebel Alliance logos for the D-pillar and Rogue One badges on the front doors. The interior is highlighted by backlit Star Wars doorsill plates, Rebel Alliance and Galactic Empire logos in the cupholders, and logo floor mats. The only two paint colors available are Magnetic Black and Glacier White.

The “Battle Tested” TV campaign launching in Canada includes one 30-second national spot as well as a full 60-second hero version of the spot in cinemas and a flight of sales and dealer-engagement ads that will follow later this fall.

The Rogue TV spot highlights the comprehensive suite of Intelligent Safety Shield technologies available on the 2017 Nissan Rogue, including Intuitive All-Wheel Drive and the Forward Emergency Braking with Pedestrian Detection system. Forward Emergency braking with Pedestrian Detection can provide audio and visual display warnings to help alert the driver of a potential frontal collision. If a collision is unavoidable, the feature can engage the brakes to help reduce both the speed of the impact and the severity of the collision. The system is also designed to help avoid or mitigate frontal collisions with pedestrians, using a camera-based system to recognize human shapes.

In addition to the regional TV advertising rolling out later this year, the campaign includes robust digital and social content to complement and amplify the “Battle Tested” messaging across all channels.

The Nissan Rogue, one of the top 10 best-selling vehicles in Canada in October 2016, has been updated for the 2017 model year with fresh exterior and interior treatments, an expanded suite of Nissan Safety Shield technology including available Forward Emergency Braking with Pedestrian Detection*.

About “Rogue One: A Star Wars Story”

From Lucasfilm comes the first of the Star Wars standalone films, “Rogue One: A Star Wars Story,” a new epic adventure. In a time of conflict, a group of unlikely heroes band together on a mission to steal the plans to the Death Star, the Empire’s ultimate weapon of destruction. This key event in the Star Wars timeline brings together ordinary people who choose to do extraordinary things, and in doing so, become part of something greater than themselves.