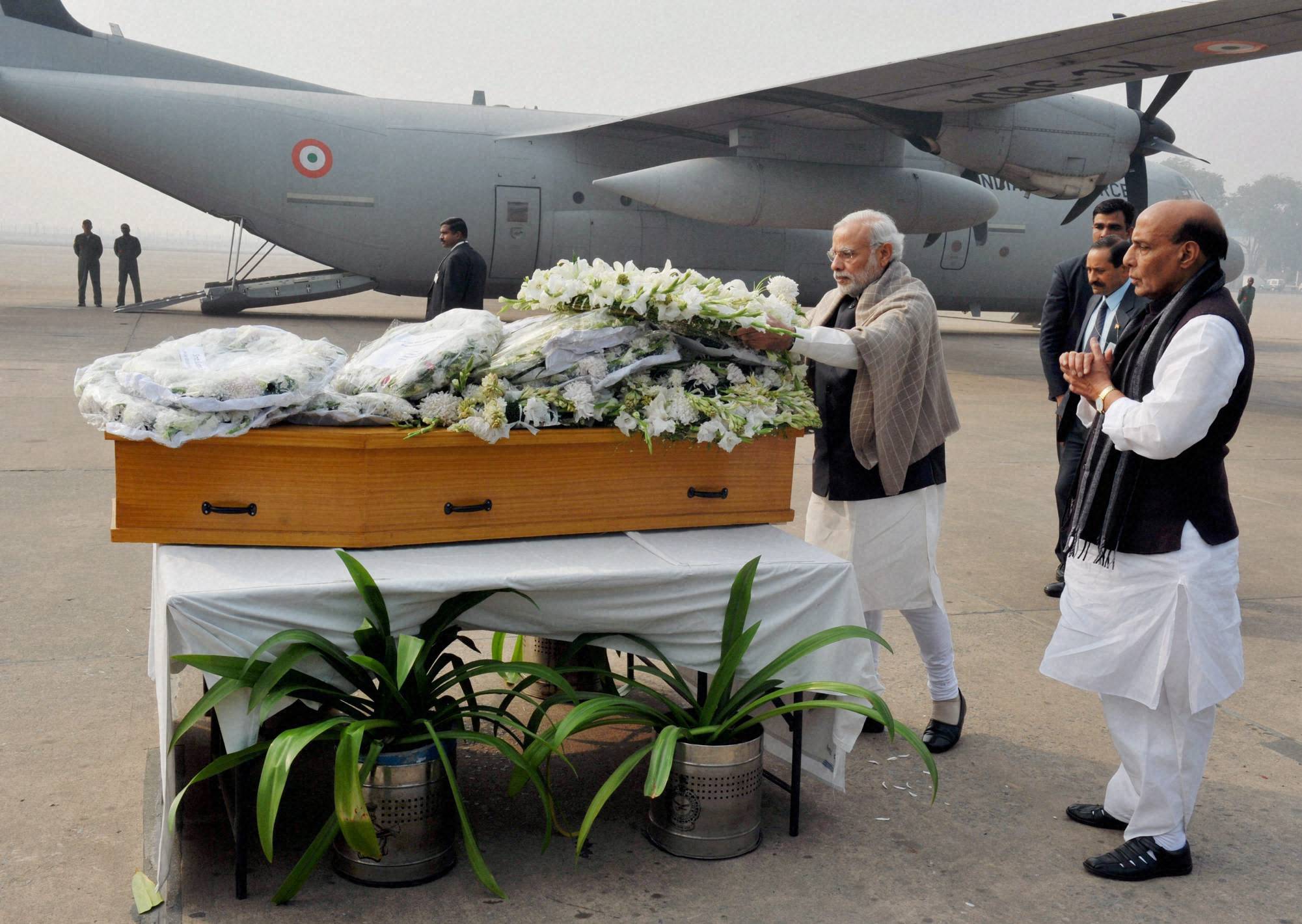 Srinagar, Jan 7 (IANS) Thousands on Thursday evening attended the burial of Jammu and Kashmir Chief Minister Mufti Mohammad Sayeed, who died in New Delhi. While the PDP urged the governor to let his daughter Mehbooba Mufti take charge of the Muslim-majority state, coalition partner BJP said it may bargain for a 50:50 formula for rest of the chief ministerial term.

A huge mass of mourners assembled at the first ‘Nimaz-e-Jinaza’ (funeral prayer) for Sayeed here and a second in his hometown Bijbehara where he was laid to rest.

Peoples Democratic Party leaders Muzaffar Hussain Beigh and Altaf Bukhari submitted a letter to Governor N.N. Vohra nominating Mehbooba Mufti as the leader of the PDP’s legislature party — which would entitle her to assume charge as the new chief minister.

Mehbooba Mufti, a Lok Sabha member, will have to get elected to the assembly or be nominated to the legislative council (upper house) within six months if she succeeds her late father as the chief minister. She will be the first woman chief minister of the country’s only Muslim-majority state.

However, BJP leader Avinash Rai Khanna, who is in charge of the party affairs in Jammu and Kashmir, said the chief ministerial issue has not been decided yet, and the party will take a call soon.

“There has been no discussion over the issue of the chief ministerial candidate yet. When the matter comes up, the party will take a call,” Khanna told IANS.

“It is for the PDP to decide who will be its legislature party leader,” he said when asked about the PDP nominating Mehbooba Mufti as its leader in the state legislature.

Another top BJP functionary told IANS that the party will push for the formula of 50:50 for the remainder of the chief ministerial term, meaning for half of the rest of the term the PDP would head the government and the BJP for the other half.

“Mufti saheb had proposed earlier too to consider Mehbooba as the chief minister when we were in talks for the formation of the government earlier, but we were not ready,” he said.

“We had clearly said that if he himself opts for the top post, the BJP has no problem but if Mehbooba would be projected, the BJP would go for 50:50 formula,” the BJP functionary said on condition of anonymity.

In the last assembly elections, the Peoples Democratic Party won 28 seats and the BJP 25. The opposition National Conference got 15 and the Congress 12.

Sayeed died in New Delhi on Thursday, 14 days after he was hospitalised.

He passed away at 9.10 a.m. at the All India Institute of Medical Sciences, three days after he was put on ventilator. A severely diabetic, he “died due to bone marrow dysfunction”, a spokesman of the AIIMS told IANS. He was admitted to the AIIMS on December 24 with fever as well as chest infection.

Amid seven-day state mourning, his body was flown to Srinagar.

Sayeed, who survived several attacks on him by militants, was chief minister the first time in 2002-05 in a coalition government with the Congress. In March last year, he allied with the BJP to become the chief minister again.

President Pranab Mukherjee lauded his contribution to Jammu and Kashmir and India through long years of public service.

Born in Bijbehara on January 12, 1936, to a family of ‘Peers’, Sayeed studied in Srinagar and at the Aligarh Muslim University before he joined politics in 1959.

After taking on the iconic Sheikh Abdullah, Sayeed became a cabinet minister in Jammu and Kashmir in 1972. Just three years later, he became head of the state unit of the Congress party.

He joined Prime Minister Rajiv Gandhi’s government in 1986 but quit the following year to throw his lot with V.P. Singh, who revolted against Gandhi’s leadership and went on to become the prime minister in 1989.

Sayeed became the home minister in the V.P. Singh government.

In 1999, after a brief stint again in the Congress when P.V. Narasimha Rao became its leader, Sayeed and his daughter Mehbooba floated the PDP.