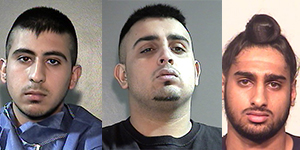 Today, Surrey RCMP cautioned the public against interaction with five individuals who have been the targets of shots fired incidents over the past two months.

These Lower Mainland individuals have been the victims or intended victims of shootings that have occurred in Surrey this summer. They have each been spoken to by investigators and, although their lives are in danger, they have not provided statements to police. As such, Surrey RCMP believes these people have become a risk to public safety (see photos attached):

“Each of these individuals has refused to provide information to police on these violent incidents,” says Assistant Commissioner Dwayne McDonald, Surrey RCMP Officer in Charge. “At this point, we must assume that these men continue to be targets and, as such, we are advising the public to be cautious of any interaction with these five individuals.”

Since the beginning of 2017, Surrey has had 27 files that involve shots being fired. While this is a 47% decrease over the same time period last year, it is still extremely concerning for both police and the public. There has been a recent increase in these incidents, with 6 files in the month of July.

“I know the residents of this city are frustrated. I hear all of your concerns and I share your frustration,” says A/Commr. McDonald. “However, I do want you to know that we are making headway and we are aware of a number of people who are involved. As a result, our number of shots fired and our violent crime overall have been declining, but we need to keep the pressure on to ensure this recent uptick doesn’t continue.”

While the City of Surrey has experienced a number of shots fired calls, this issue is not unique to Surrey, with similar incidents happening in a number of Lower Mainland cities. Police believe that at the root of this violence are conflicts over the drug trade. These investigations are particularly challenging for police with victims who do not want to cooperate, even when they know the identity of the suspects. These investigations are complex and require many investigative steps to obtain the proper evidence for arrests and successful prosecutions.

The Surrey Gang Enforcement Team (SGET), with support from the Combined Forces Special Enforcement Unit (CFSEU-BC), is involved in a significant overt enforcement operation to target individuals related to the drug trade. Surrey RCMP also continues its preventative work in schools to stop kids from entering the drug trade through presentations, the Code Blue and Mini-Blue after school fitness programs, and the Wrap program which is aimed at kids who are at significant risk of gang involvement. The Surrey RCMP Parent Helpline (604-599-7800) is also available for parents who believe their child might be involved in illegal activities.

The Surrey RCMP continues to appeal to the public for information regarding these on-going investigations. If you have information about any of these incidents or the people involved, call the Surrey RCMP at 604-599-0502 or Crime Stoppers at 1-800-222-TIPS if you wish to remain anonymous.

Additionally, if you see unknown, occupied vehicles idling for long periods of time, call Surrey RCMP’s non-emergency line. Recent investigations have shown that these suspects are often waiting in idling vehicles for their intended targets to appear.

“The residents of Surrey care deeply about this city, and so do we. We are committed to ending this violent and dangerous activity,” says A/Commr. McDonald.