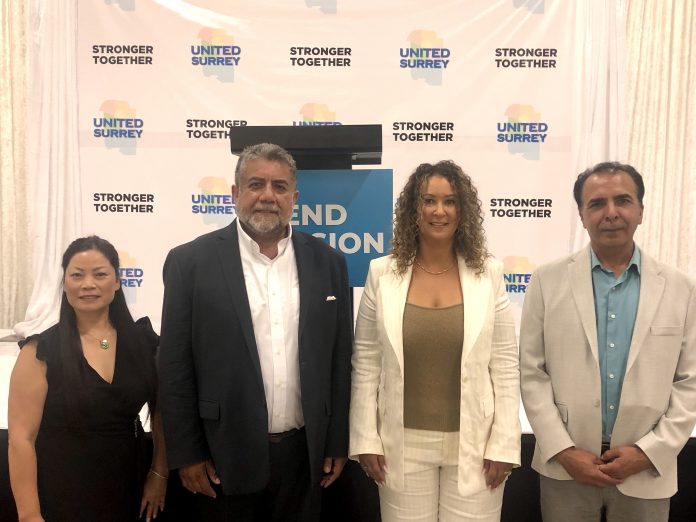 Surrey, BC – Compelled by determination to repair a divided city and comprised of a group of like-minded candidates from across the political spectrum, United Surrey is officially launching its campaign for the upcoming municipal election.

Led by Mayoral candidate Sukh Dhaliwal, long-time Member of Parliament for Surrey-Newton, and joined by City Council candidates including former Member of Parliaament Jasbir Sandhu, Julie Tapley, Jeff Bridge and Becky Zhou, the party formed after extensive community consultations. A strong desire for a return to elected officials who foster unity as well as a back-to-basics approach to delivering top quality services, made the decision to step forward one that was propelled by residents, according to Sukh Dhaliwal.

“We have listened very carefully to those living in every corner of Surrey, and as a result, our party’s intent, approach to representation and policy proposals are designed by the people and for the people,” says Dhaliwal, “Our slate represents diverse experiences and distinct political backgrounds and belief systems, yet we are unified by our shared commitment to ending division.”

United Surrey is launching its campaign with a four-point action plan, including:
1) An Immediate One-Year Tax Freeze

4) The Shortest Development Permit Approval Times in Metro Vancouver
Within Two Years, With an Initial Focus on Rentals

United Surrey will continue to introduce components of its vision for the future of Surrey over the coming months, with a costed full platform to be released during the official campaign period.

Federal government sends $2B in health transfers, other funding to provinces

Two police officers remain in hospital after a shootout outside a B.C. bank