Tara Singh Hayer (Nov. 15, 1936 – November 18, 1998) was an Indo-Canadian Times newspaper editor & publisher, who was assassinated in Surrey Canada on November 18,1998 after reporting about terrorism, he was recognized with hundreds local, provincial, national and international awards.

Some of those awards include: The Order of British Columbia, the Journalist Award by the Municipality of Surrey for courageous and outstanding contribution to Punjabi Journalism in Canada, the Commemorative Medal for the 125th Anniversary of Canada, the International Award of Distinction for Journalism from the International Association of Punjabi Authors and Artists, a Certificate of Appreciation from the Royal Canadian Mounted Police (RCMP).

In 1999, Canadian Journalists for Free Expression renamed its Press Freedom Award the “Tara Singh Hayer Press Freedom Award” in Hayer’s honour. Each year, the award is given to a Canadian journalist who, through his or her work, has made an important contribution to reinforcing and promoting the principle of freedom of the press in Canada or elsewhere.

In 2000 Tara Singh Hayer’s name was added to the Canadian News Hall of Fame. He was the first Canadian of non-English, non-French origin to be added to the Hall. In 2000, Hayer was also selected as one of the International Press Institute’s 50 World Press Freedom Heroes of the past 50 years. One of the presenters of the Award for Late Tara Singh Hayer as “World Press Freedom Hero” in May 2000 was USA Senator Ted Kennedy in Boston, USA and Award was accepted by Dave Hayer & Isabelle Martinez Hayer on behalf of the Hayer family.

On Monday, November 18, we commemorate Tara Singh Hayer, my father’s message of freedom of expression and freedom of speech, his message against hate, violence, extremism and terrorism said Dave Hayer.

Dave said, “my father’s life was devoted to democracy, freedom of speech, and freedom of the press to speak out against those who try to prevent those freedoms, the right that we in Canadian society hold so precious, to live and speak without fear.”

“He believed in leading by example, and even though he knew he was putting his life in danger, he had the courage to not only speak out about his own beliefs but also speak out for victims and the innocent.”

“My father believed that it was not right to remain quiet while some individuals worked against our freedoms, because then they would win and we must never let those who promote hatred, extremism, violence and terrorism succeed.”

“Fear is what drives terrorism around the world, but we must stand united against that, and fight back peacefully as my father did through his newspaper and through his words. And we must have the courage, as he did, to keep talking about, and keep fighting for our freedoms and our rights.” 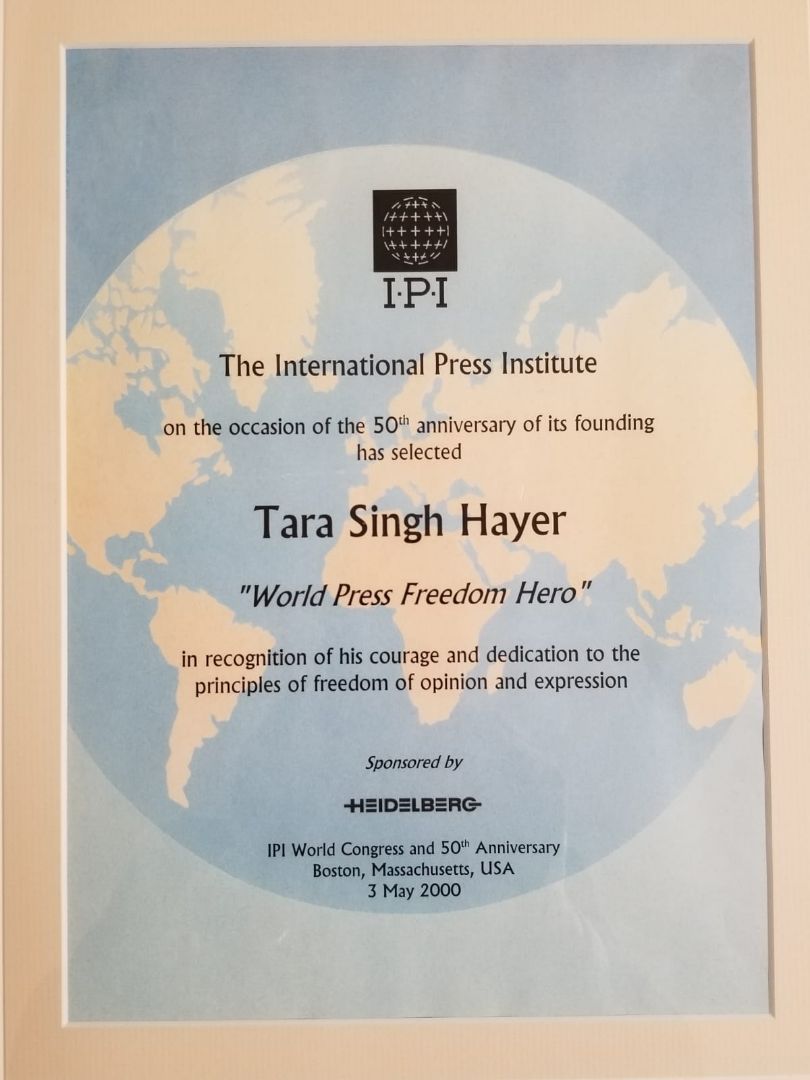 “All of us must work long and hard to ensure that Canadian Laws protect the rights of victims, rights of the victims’ families and the rights of all innocent individuals.”

“The rights of all law-abiding Canadians must be stronger than the rights of those who commit criminal acts. Our justice system must recognize that.”

“Too often our courts and judges allow the rights of criminals to triumph, to supersede the rights of innocent victims, and as a result there is little redress or closure for the victims.”

“We must, as my father often said, and our community members tell me, close the revolving door of our courts that allow criminals to essentially walk free, while victims and their families continue to suffer, grieve and be held hostage to the “rights” of the criminal.”

“I would like everyone to remember my father as a voice for freedom, democracy and for the courage that supported him to speak out against the terrorism that resulted in the deaths of 331 innocent people, over 268 Canadians & 86 children were killed in Air India bombings.”

“I would like everyone to remember that only by speaking out, by being strong and unafraid of threats can we win the fight against terrorism, hatred and violence. We all need to work together. We all need to be united in achieving those goals. Only then we will be truly free, and truly able to live in a society where our rights are equal, said Dave Hayer.”