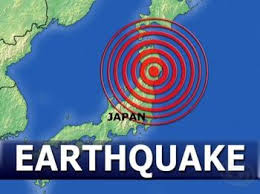 Tokyo, Nov 14 (IANS) A 7.0-magnitude earthquake struck off the coast of Kyushu in southwestern Japan on Saturday, triggering a minor tsunami in the southern part of Kagoshima prefecture, Xinhua reported.

The strong earthquake jolted about 160 km southwest of Makurazaki, Kagoshima, at 5:51 a.m. local time (20:51 GMT on Friday) at a depth of about 10 km, according to the Japan Meteorological Agency (JMA).

The Nuclear Regulation Authority said no abnormalities were detected at the Sendai nuclear power plant in Satsumasendai, Kagoshima.

The earthquake was reported as 6.7 on the Richter scale by the US Geological Survey.

The JMA said that aftershocks with the seismic intensity of 3 on the JMA scale might happen in the following week.