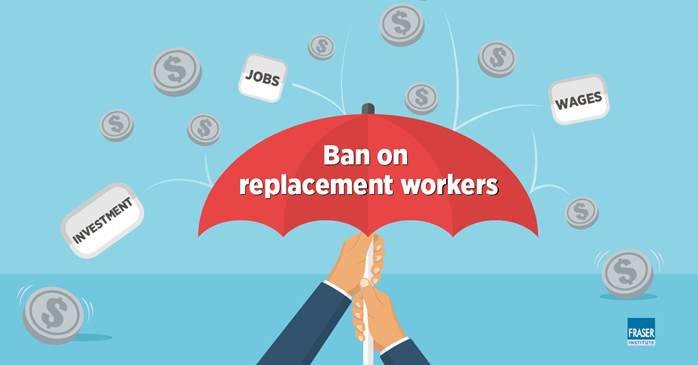 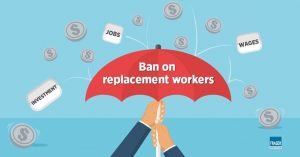 “It may seem counterintuitive, but laws that prevent businesses from hiring temporary workers during strikes and lock-outs actually harm workers in the long run by discouraging business investment,” said Charles Lammam, director of fiscal studies at the Fraser Institute and co-author of The Economic Effects of Banning Temporary Replacement Workers.

B.C. and Quebec are the only two jurisdictions in North America that prohibit businesses from hiring temporary workers during a strike or lock-out.

The inability to use temporary workers during labour conflicts means that the cost of doing business in these jurisdictions can be markedly higher than in other jurisdictions, which discourages entrepreneurs from investing. In fact, the evidence shows such bans reduce the rate of investment by 25 per cent.

Business investment is critical to improving the ability of workers to transform inputs into outputs, or what economists refer to as productivity. Less business investment ultimately means lower productivity for workers, which in turn means lower wages than would have been the case with higher levels of investment. In fact, research shows bans on temporary workers during strikes and lock-outs lower wages for unionized workers by between 1.8 and 3.6 per cent.

What’s more, when businesses are discouraged from investing (i.e. setting up, developing, or expanding operations), fewer jobs are created. According to research, such bans reduce the employment rate by 1.3 percentage points.

And finally, while advocates of replacement worker bans argue that they lead to less labour strife, the evidence actually shows the opposite: bans increase labour disruptions with more frequent and longer work stoppages.

In fact, between 2008 and 2016, B.C. lost 798 working days (per 1,000 workers) because of work stoppages—the second highest working days lost after Quebec, the only other province with the ban. Alberta, which does not have a ban on replacement workers, had among the lowest number of lost working days at 89.

“B.C. and Quebec are the only two jurisdictions that have outlawed temporary replacement workers and they have experienced the most labour disruptions over the past nine years,” Lammam said.