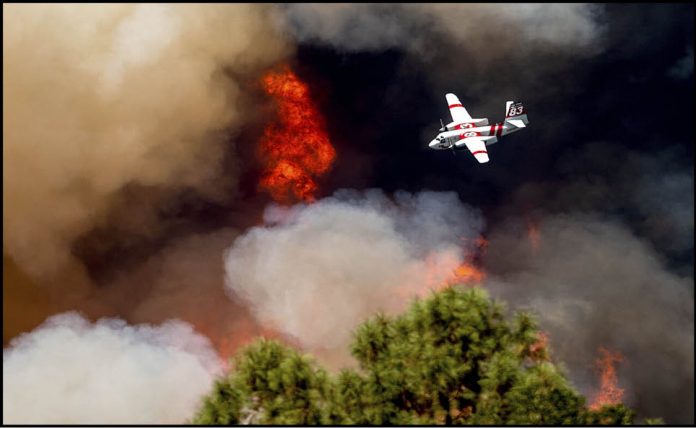 (AP) In 1998, as nations around the world agreed to cut carbon emissions through the Kyoto Protocol, America’s fossil fuel companies plotted their response, including an aggressive strategy to inject doubt into the public debate.
“Victory,’’ according to the American Petroleum Institute’s memo, “will be achieved when average citizens `understand’ (recognize) uncertainties in climate science… Unless `climate change’ becomes a non-issue… there may be no moment when we can declare victory.’’
The memo, later leaked to The New York Times that year, went on to outline how fossil fuel companies could manipulate journalists and the broader public by muddying the evidence, by playing up “both sides’’ of the debate and by portraying those seeking to reduce emissions as “out of touch with reality.’’
Nearly 25 years later, the reality of a changing climate is now clear to most Americans, as heatwaves and wildfires, rising sea levels and extreme storms become more common.
Last week, President Joe Biden announced moves intended to expand offshore wind, though he stopped short of declaring a national climate emergency. A Supreme Court ruling last month limited the federal government’s ability to regulate carbon emissions from power plants, meaning it will be up to a divided Congress to pass any meaningful limits on emissions.
Even as surveys show the public generally has become more concerned about climate change, a sizeable number of Americans have become even more distrustful of the scientific consensus.
“The tragedy of this is that all over social media, you can see tens of millions of Americans who think scientists are lying, even about things that have been proven for decades,’’ said Naomi Oreskes, a historian of science at Harvard University who has written about the history of climate change disinformation. “They’ve been persuaded by decades of disinformation. The denial is really, really deep.’’
And persistent. Just last month, even with record heat in London, raging wildfires in Alaska and historic flooding in Australia, the Science and Environmental Policy Project, a pro-fossil fuel thank tank, said all the scientists had it wrong.
“There is no climate crisis,’’ the group wrote in its newsletter.
Years before COVID-19 set off a wave of misinformation, or former President Donald Trump’s lies about the 2020 election helped spur an insurrection at the U.S. Capitol, fossil fuel companies spent big in an effort to undermine support for emissions reductions.
Now, even as those same companies promote investments in renewable energy, the legacy of all that climate disinformation remains.
It’s also contributed to a broader skepticism of scientists, scientific institutions and the media that report on them, a distrust reflected by doubts about vaccines or pandemic-era public health measures like masks and quarantines.
“It was the opening of a Pandora’s Box of disinformation that has proven hard to control,’’ said Dave Anderson of the Energy and Policy Institute, an organization that has criticized oil and coal companies for withholding what they knew about the risks of climate change.