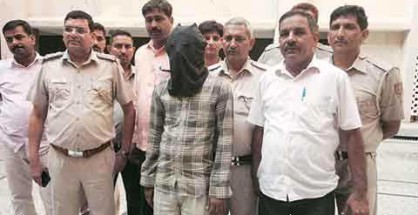 New Delhi, July 21 (IANS) In revelations that have shocked even the police, serial killer Ravinder Kumar has admitted to raping and murdering more than 30 children in and around Delhi, an officer said on Tuesday. Delhi Police has formed a special team to investigate the horrific case.
In a confession that has left Deputy Commissioner of Police Vikramjit Singh “deeply shaken”, Kumar confessed to snuffing out the lives of the children — all under 14 years — in and around Delhi since 2008.
“I am deeply shaken from inside,” Singh told IANS. “I cannot express in words what all I am going through.”
Singh said that on Monday Kumar — who hails from Kasganj in Uttar Pradesh but lives in Delhi — was taken to Narela, Bawana and Alipur, the places in outer Delhi identified by him during interrogation.
“This helped us to establish the fact (about the number raped and killed),” the officer said.
“I am myself monitoring the case. The investigations till now suggest that the toll might reach 40,” he added.
Delhi Police later said they had set up a Special Investigation Team (SIT) to probe the case to look for more evidence of the horrific crime in the neighbouring states of Haryana and Uttar Pradesh.
The SIT, along with local police, would investigate cases of missing children in the two states which border Delhi.
Until now, police had thought the number of Kumar’s victims would be around 15.
Police have mounted a massive operation to know if the cases of missing children filed in the past five years in Vijay Nagar, Bawana, Narela, Alipur, Begumpur, Kanjhawala, Samaypur Badli and other areas are related to this case, Singh said.
The 24-year-old Kumar — who apparently shows no guilt feeling — began his crime spree sometime in 2008.
He would lure children with candies and kill them if they resisted. Worse, he would have sex with their bodies, making him suffer from necrophilia, said Singh.
Kumar on Tuesday admitted to having committed his first crime when he was barely 17 years old.
A labourer’s girl child from a Delhi Metro construction site here was his first victim. He took her to an isolated spot, had sex with her and then dumped the body after killing her.
Police, however, could not find a record of the crime as it was not reported.
Getting scot free after the first crime emboldened Kumar, he told police.
In 2009, Kumar kidnapped a labourer’s son from Vijay Vihar here, sodomised and strangled him.
This time a case was registered against him but he managed to evade law due to lack of witnesses and other evidence.
Kumar claimed that he had killed 11 of his victims after they resisted his attempts to sexually assault them or threatened to expose him.
Revealing his modus operandi, Kumar told police that he usually committed the crimes in the afternoon or in the early hours.
Singh told IANS: “He would go around colonies looking for children playing outside their house or near toilets and lure them with money and sweets. If they refused, he would simply gag and pick them up.
“In exceptional cases, if the victim agreed not to reveal the matter to anyone, Kumar would let him or her go.”
According to police, Kumar also admitted to having committed two crimes in Kanjhawala and Mundka in outer Delhi in 2011.
He even targeted two 14-year-olds known to a relative while visiting his aunt during a marriage ceremony in Aligarh in 2012. However, they were let off after they promised to keep quite about the incident.
Kumar accepted that he committed two crimes in Noida in 2013 when he was a cleaner with the contractor of a transport company.
Last year, Kumar was arrested for assaulting a boy in Begumpur in south Delhi. He abducted the boy near his house and fled after slitting his throat.
He assumed the boy was dead. But the victim survived as police found him bleeding in a septic tank of an under-construction building.
Kumar got bail then in that case — because at that time police did not know about the enormity of his saga.
He was again arrested on July 16 for raping and murdering a six-year-old girl in Begumpur. The girl had gone missing on July 14.
And the interrogation that followed this arrest exposed Kumar’s shocking crime saga.