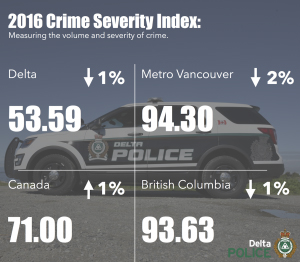 What do all of these numbers mean for you as citizens of Delta? Chief Dubord explains, “Quite simply, Delta remains one of the safest communities in BC. Delta is well below the provincial and national average CSI rates.  Although the numbers are encouraging we are steadfast in our approach to drive these numbers down ensuring both the safety of our citizens and apprehension of offenders.  Delta Police are in the process of introducing a new enhanced service delivery model and we are confident this will keep the CSI trending downward. I believe we need to be innovative in our policing approach, deploying our resources strategically and leveraging technology to our full advantage. Additionally, and most importantly we must engage with you, our citizens, to work together to keep Delta one of the safest communities in the province. It is very important to me that our citizens feel and know they are safe in this community.”