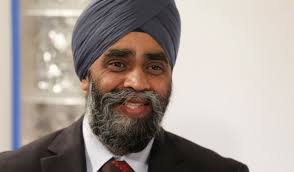 OTTAWA: Defence Minister Harjit Sajjan says Canada’s military trainers in Iraq will be placed where it makes the most sense and where they can have the greatest impact.

Options for the Trudeau government’s beefed-up on-the-ground commitment to the campaign against the group known as the Islamic State of Iraq and the Levant are still being formulated.

But in an interview, Sajjan says he’s open to a variety of options, including the introduction of conventional army units and expanding the scope of training to include Iraqi forces in the country’s south.

The former Conservative government chose to align itself with the Kurds in the north, who operate in a semi-autonomous region and have shown the most willingness to battle extremists.

Sajjan says he’s talking with the U.S.-led coalition on where Canadian troops would be of most use.

He also says he is certain that despite deep sectarian divisions among Iraqi security forces, Canadians have a proven track record of winning the confidence and respect of those they are training.