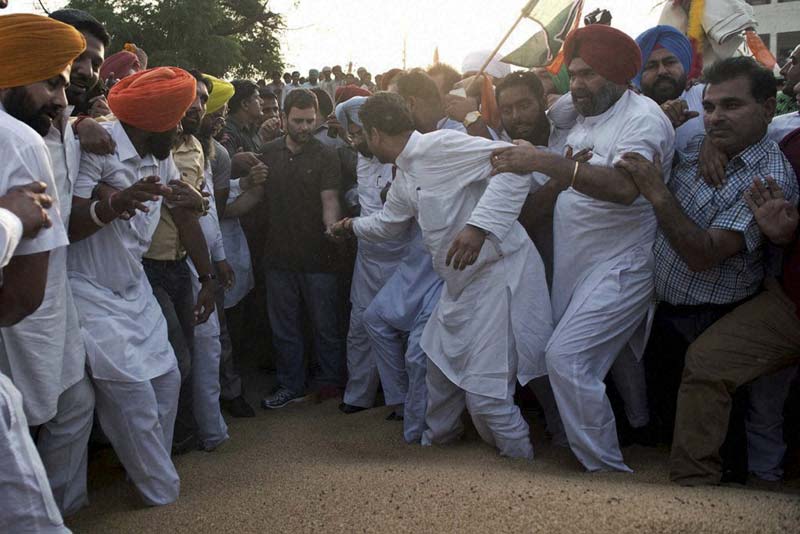 New Delhi, April 29 (IANS) Congress vice president Rahul Gandhi on Wednesday took on Prime Minister Narendra Modi on problems in the agricultural sector, asking him to visit Punjab and learn about the plight of farmers who are integral to the government’s flagship ‘Make in India’ initiative. The government hit back, asking him to visit his own constituency first.
Raising the issue in the Lok Sabha during zero hour, a combative Gandhi said that his recent meeting with farmers in Punjab’s wholesale grain market revealed the reality of the country’s wheat bowl, where “farmers are crying and Haryana agriculture minister says those (farmers) who commit suicide are cowards”.
“Government says there should be ‘Make in India’… It is our government, your government, but not farmers’ government,” he said.
“Our prime minister is on a tour of India, he must also go to Punjab. He will know what is happening… Farmer growing wheat is also ‘Make in India’,” he said taking a jibe at the prime minister and his key policy.
The jibe triggered an uproar in the lower house with members of the ruling alliance protesting the comments and hitting back at the Congress vice chief, leading Speaker Sumitra Mahajan to adjourn the house briefly.
Jumping to Modi’s defence, Food Processing Induistries Minister Harsimrat Kaur Badal said though Gandhi has visited Punjab, he was yet to visit his own constituency, Amethi, in Uttar Pradesh.
“I would like to ask him when the farmers were suffering inclement weather, including hail storms, where was he then?
“Some people have come back and to reinvent themselves, they are playing a drama here. They should do so in Amethi,” she said.
Food and Civil Supplies Minister Ram Vilas Paswan said that the Modi government is “doing the work which you (the Congress-led UPA) didn’t do for the nation”.
Intervening in the discussion, Paswan said that the government has for the first time given a “value cut” as far as the quality of grain is concerned.
“We have increased the import duties and have also compensated farmers,” he said.
He assured the house that all of farmers’ grain would be bought at the Minimum Support Price (MSP). “By just visiting the mandi (wholesale market), they are trying to becomes martyrs,” he said in a dig at Gandhi.
“You should thank the prime minister and the government for the support being given to farmers,” he said.
Gandhi, during his visit Punjab – the food bowl state of the country – Tuesday, had also questioned the prime minister on his ‘Make in India’ campaign and asked the the central as well as the Akali Dal-BJP alliance government in the state to help farmers and labourers who are India’s “spinal cord”.
“The prime minister talks about ‘Make in India’. No one does more ‘Make in India’ than the farmers of Punjab… The beginning (of ‘Make in India’) should be done from them.
“When the poor do ‘Make in India’, is it not ‘Make in India’? Is it something else?” he asked.
In a move aimed to mount pressure on the government over the agrarian crisis, the Congress vice president traveled to grain markets in Punjab’s Sirhind, Khanna and Mandi Gobindgarh towns on Tuesday in the second class compartment of a train to interact with farmers about the problems they are facing with procurement and lifting of wheat stocks.
He criticised the Modi government and the state government for being indifferent to the problems of farmers.
Farmers across Punjab are protesting the tardy lifting of wheat stocks.