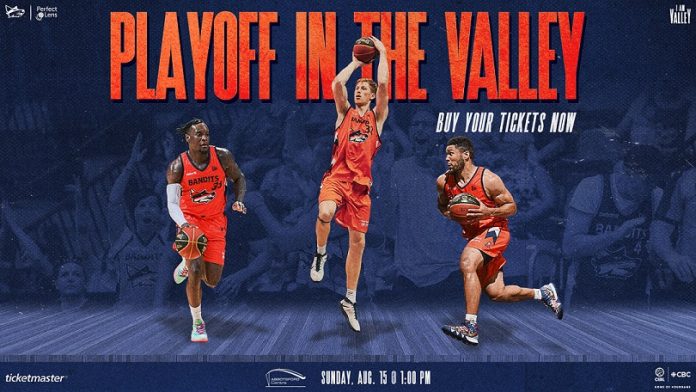 Tickets for the nationally televised game on Aug. 15 are now on sale through Ticketmaster

ABBOTSFORD, B.C., August 3, 2021 – The Fraser Valley Bandits announced Tuesday that the club is going on sale with tickets for its highly anticipated and potential quarterfinal playoff matchup taking place on Sunday, Aug. 15. The scheduling of the game is currently subject to the order in which the Canadian Elite Basketball League (CEBL) regular season standings finalize following the conclusion of the regular season on Tuesday, Aug. 10.

Quarterfinal matchups will see the team that finishes third host a single-game knockout against the sixth place team, while fourth place will host the fifth place team. 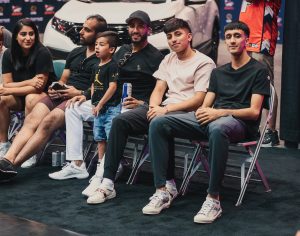 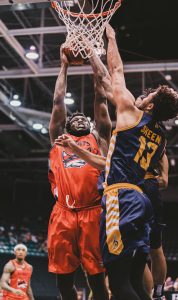 Fraser Valley is currently ranked fourth with a 5-5 record. Should Fraser Valley win two of its next four games against Edmonton (Aug. 4 and 6) and Saskatchewan (Aug. 8 and 10), the club will be guaranteed either a third or fourth place finish in the CEBL standings and thereby will host a quarterfinal playoff game.

Due to the uncertainty of how each team’s season will conclude, ticket holders are able to enjoy flexibility regarding use of their tickets in the event that Fraser Valley finishes fifth or sixth in the standings and is required to play a quarterfinal playoff game on the road. If Fraser Valley finishes fifth or sixth, ticket holders will be able to apply the value of their tickets toward a future Bandits game in 2022 or can request a refund by contacting tickets@thebandits.ca.

A quarterfinal playoff at Abbotsford Centre on Aug. 15 would mark the first time in club history that Fraser Valley has hosted a playoff game on home soil. This past July 14th, the Bandits became the first professional sports team in B.C. to welcome fans back to its stands.

This historic feat paved the way for Fraser Valley to host three consecutive sell-outs at Abbotsford Centre with an average of more than 2,000 fans in attendance at each game. In accordance with consultation and guidance from local health authorities, the venue’s current seating configuration permits it to welcome up to 50 per cent of its regular capacity for Bandits games.

“We would not be where we are today without our fans. The Fraser Valley is home to some of the most die-hard fans in sports and we have seen that firsthand since we launched. After being the most-watched team at last year’s CEBL Summer Series and now hosting three straight sell-outs, I believe that this is the Valley’s moment to come together to create an intense playoff atmosphere at Abbotsford Centre. It’s a single game elimination and everyone is invited,” said Bandits vice president Dylan Kular.

The Bandits have already clinched a playoff spot thanks to the team’s defensive versatility and well-rounded scoring. Centre Brandon Gilbeck currently leads the CEBL with three blocks per game, while Kenny Manigault has been a menace on the defensive end, averaging a league-leading 2.1 steals per game. On the offensive end, seven Bandits are averaging more than nine points per game, including 2019 CEBL Finals MVP Alex Campbell, who leads Fraser Valley in scoring with 15 points per game.

A victory on Aug. 15 would punch Fraser Valley’s ticket to Championship Weekend (Aug. 18-22) in Edmonton, Alta., where the Bandits would compete as one of four teams vying for the CEBL title.

Fraser Valley’s quarterfinal tilt will be nationally televised on CBC. In addition to live stream touchpoints on the free CBC Gem streaming service and cbcsports.ca, as well as CEBL+, all Bandits regular season games are available to watch on TELUS Optik TV® on Channel 1901 Lower Mainland Live Sports. Fans can learn more and subscribe to CEBL+ via this link.

A league created by Canadians for Canadians, the CEBL has the highest percentage of Canadian players of any professional league in the country, with 75 percent of its current rosters being Canadians. Players come from the NBA, NBA G League, top international leagues, the Canadian national team program and top NCAA and U SPORTS programs. The only First Division Professional League Partner of Canada Basketball, the CEBL season typically runs from May through August. Head to thebandits.ca for more information and click here to purchase your tickets.