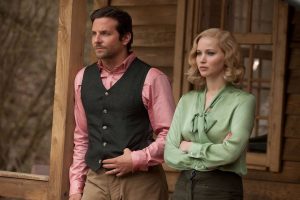 Looks like Canada and residents/visitors to beautiful British Columbia get the jump on film fans across the border with the EOne entertainment release of Serena. Strong women are in Vogue in this rousing westernized soaper now making its mark at the Fifth Avenue Cinemas.
Reigning teen leading lady heartthrob Jennifer Lawrence, hotter than ever from her bo office juggernaut The Hunger Games, tones things down a notch or two as she saddles up for some vintage action as the wild heroine/villain in this stately drama. Back To 1929 we go for This classic tale of rich guy meets poor girl. Smitten by this horse riding charmer is the equally elegant though oh so much richer George Pembertom. Film fans will know that this is the third time Lawrence shares screen and kissy time with comic turned lading man Bradley Cooper (Silver Linings Playbook). My oh my has this dude come a long way since his The Hangover rather auspicious raunchy comedy review.
No comedy is on tap here. Instead director Susanne Bier explores the salty business relationship between George, a rich lumber baron, a local sheriff and a partner, just what impact Serena has on These relationships forms the heart of this story. Experience a very authentic looking Smoky Mountains atmosphere laced with hidden surprise, murky ancient rituals and the odd cure or two to keep things moving forward at an engaging clip.
British notables Toby Jones and Rhys Ifans also settle in nicely as town locals who figure prominently in this 109 minute emotional drama that fans of Lawrence and Cooper will likely enjoy.
Serena (PG) ***