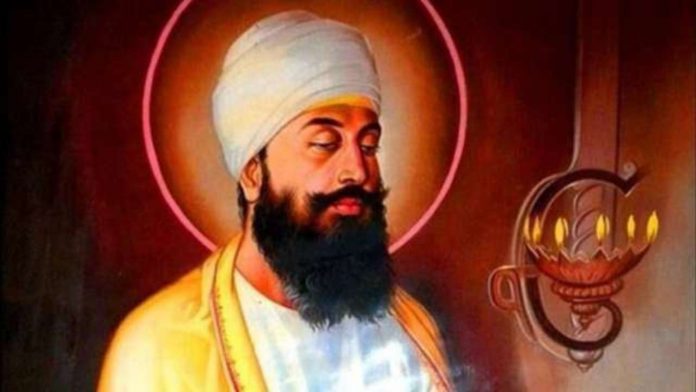 Sikhs all over the world celebrated 400th birth anniversary of Guru Tegh Bahadur, the 9th Guru (Teacher) who was born on April 18, 1621 and martyred on November 24, 1675. Guru Tegh Bahadur composed 116 Shabads (Hymns) in15 Ragas in Aad Guru Granth Sahib, the Holy Book of Sikhs. He was the Champion of Human Rights. Because of his teachings which included “Fear Not and Frighten Not” he became a socio-political challenge to the Muslim rule and then Moslem Emperor of India Aurangzeb.
Aurangzeb had started a campaign of forcibly converting Hindus to Islam and demolishing Hindu temples. Those who refused were killed. Threatened with conversion or death, the Pandits of Kasmir came in a delegation to Guru Tegh Bahadur for help and intercession. At the behest of his 9 year old son who later became 10th and the last living Guru, Guru Gobind Singh, Guru Tegh Bahādur left for Delhi to defend the Hindus before Aurangzeb and was arrested at the emperor’s order along the way. He was joined by hundreds of Sikhs on the way to Delhi. Guru told the delegation of Pandits to tell Aurangzeb that if he could convert Guru Tegh Bahadur to Islam they would gladly convert. While in prison Guru was given the opportunity to accept Islam, perform a miracle or be tortured to death. The emperor even promised great rewards to Guru if he converted to Islam. Guru Tegh Bahādur refused options given to him. Along with him were arrested two brothers, Bhai Mati Das and Bhai Sati Das and Bhai Dyal Das. Guru was put in chains in a cage and ordered to be tortured until he would accept Islam. To frighten and persuade Guru, Bhai Dyal Das was martyred by boiling alive in pot of boiling water. Bhai Mati Das while standing erect was tied between two posts. Two executioners placed a double-handed saw on his head. He was sawn across from head to loins and was martyred by cutting in two. Bhai Sati Das was martyred by wrapping him in cotton, pouring oil and burning alive while Guru Tegh Bahadur was held inside a cage to watch. Guru Tegh Bahadur was then beheaded in public at Chandni Chowk on 24 November 1675. Guru Tegh Bahadur decided to stand up for the right of freedom of worship for Hindus though he was not a Hindu. Guru not only showed sympathy for them but empathy and compassion as well. Such type of sacrifice is unique in the history of mankind. Guru Tegh Bahadur thus sowed the seeds of Human Rights at that time. Guru symbolise the triumph of good over evil. That’s why Sikhs all over the world are always ready to help anyone at any cost. It has been seen help given by Sikhs during COVID pandemic, especially contribution of Khalsa Aid around the globe during natural disasters like earthquake, floods etc. Modern day Human Rights Movement was born in 1920 after French revolution, but no one knows the contribution of Guru Tegh Bahadur.
Some of the teachings of Guru Tegh Bahadur from Aad Guru Granth Sahib:
Guru Tegh Bahadur preached one should be indifferent to misery and happiness, get rid of vices like flattery and slander, worldly pleasures, attachment and greed. Renounce ego, lust, company of evil and be humble. One should consider pleasure and pain, honour and dishonour the same. One should not get depressed while in difficulty and get ecstatic when in pleasure. Difficult time should be a time for introspection and learning rather blaming others and God. He taught we should not worry unnecessarily. If something untoward happens it should also be considered as gift of God rather blaming God. Be content with what you have and try honestly for more, but don’t be greedy. You should be ready to help those in need even at the cost of your life, but do not relinquish your faith. He preached there is only one God who abides in each and everyone. When we see same God in everyone we will not discriminate on the basis of caste, colour, gender. When someone is in pain instead of sympathy we will get empathy and compassion and consider their pain as our own because we see same God in them as well and act to remedy their pain. That’s what he did when he sacrificed his life for the sake of Hindus. There is a need to spread this message to everyone as this message is for entire humanity not only for Sikhs.

Dr. Kala Singh did MBBS degree from Delhi University, India. He worked as Psychiatric Doctor in Africa for 21 years before immigrating to Canada. He worked in Vancouver Coastal and Fraser Health Authority before retiring. He gives Sikh religious and spiritual counseling and psychotherapy to clients with stress and mental health problems. For more information he can be contacted at 604 327 5253