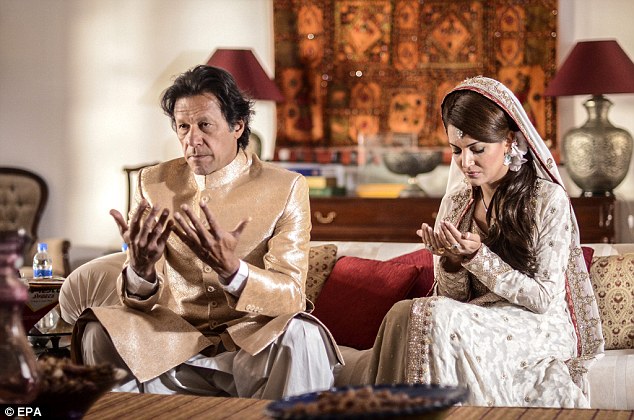 According to sources, the “nikaah” (wedding) ceremony was a low-key affair and was followed by a photo session of the newly-weds, Dawn online reported.

Earlier in the day, Pakistan Tehreek-i-Insaf (PTI) party’s Shireen Mazari dismissed reports that the wedding would be a fund-raising event for the chairman’s Shaukat Khanum Cancer Memorial Hospital in Lahore.

“As far as I know, it is an extremely private affair. There are no such ticketed cards and no grand function,” Mazari said.

“Imran is in no mood to celebrate after the Peshawar tragedy.”

Imran’s bride Reham Khan is a British Pakistani journalist who started her career in the BBC as a weather forecaster. Later, she worked for the network as a broadcast journalist. She is currently working as an anchor at DawnNews.

Imran Khan was previously married to English journalist and activist Jemima Goldsmith for nine years. The marriage ended amicably in 2004 with Goldsmith stating that she was unable to adapt to life in Pakistan.