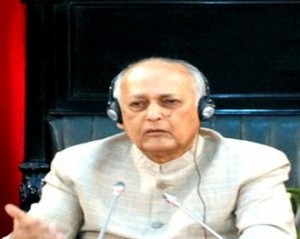 Kolkata, Nov 2 (IANS) Prominent CPI-M leader Hashim Abdul Halim, who served as West Bengal assembly speaker for 29 years at a stretch – the longest stint by any presiding officer of a legislature in independent India – died at a nursing home here on Monday, his family said. He was 80.

Halim, also a former state minister, is survived by his wife and two sons and a daughter.

“After returning from his morning walk, he was having a respiratory problem. We rushed him to a nursing home where he was put on ventilation. Subsequently he suffered a cardiac arrest and passed away at 10.10 in the morning,” said son Fuad Halim.

A noted lawyer, Halim was assembly speaker from 1982 to 2011. Known for his mastery of parliamentary rules and procedures, he many a time bailed out the Left Front government and its ministers from tough situations in the house though impeccable logic and reasoning, to which the opposition had no answers. At the same time, he had excellent relationships with all legislators, including those in the opposition.

A seven time legislator, he also served as the state’s law and justice minister from 1977 to 1982 during the first Left Front government.

He was elected chairman of the Commonwealth Parliamentary Association (CPA) and president of the World Federation of United Nations Association, and travelled around the world attending CPA conferences and seminars.

Halim was for long a member of the Communist Party of India-Marxist state committee. He was a permanent invitee to the panel at the time of his death.

Parliamentary Affairs Minister Partha Chatterjee said: “He had a very deep sense of humour and would often use his wit and sarcasm to diffuse tension in the house. I would also remember him more for his attempt to facilitate dialogue to solve the Singur issue.”

“He constantly urged Mamata Banerjee and then chief minister Buddhadeb Bhattacharjee to sit for a dialogue to solve the Singur issue,” he added.

Paying condolences to his predecessor, Speaker Biman Banerjee said: “As a speaker, one needs to take stern steps at times to run the house and he was never shy of taking such steps irrespective of whether some liked it or not.”

Leader of Opposition in the assembly and CPI-M state secretary Surjya Kanta Mishra said Halim’s passing away was great loss to all those who are fighting for parliamentary democracy.

His mortal remains will be kept at the state assembly and then at CPI-M state headquarters on Tuesday for people to pay their last respect. His final rites will be performed at Gobra burial ground in the city.