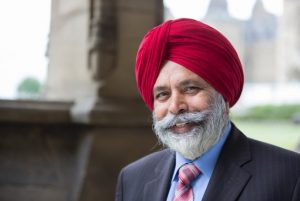 The CBC says an investigator found Kang acted improperly by trying to enter the Ottawa hotel room of a young female staffer who worked in his constituency office in June 2017. The report says the staffer objected and the MP should have known his actions were unwanted.

The CBC report also says the investigator concluded that some of the staff member’s other allegations could not be substantiated, including that she had been offered money to remain silent about his behaviour.

Kang, a former member of the Alberta legislature who was elected as a Liberal MP in 2015, resigned from the caucus last August after denying the allegations and vowing to clear his name.

Neither Kang nor the complainant immediately responded to requests for comment.

Heather Bradley, a spokeswoman for Speaker Geoff Regan, says the report cannot be released due to privacy concerns.

Prime Minister Justin Trudeau says Kang is no longer a Liberal MP and would otherwise not comment on the case.

“Whether it is this process or others, the Liberal party has no interactions or responsibility over what his next steps are,” Trudeau said in Barrie, Ont.