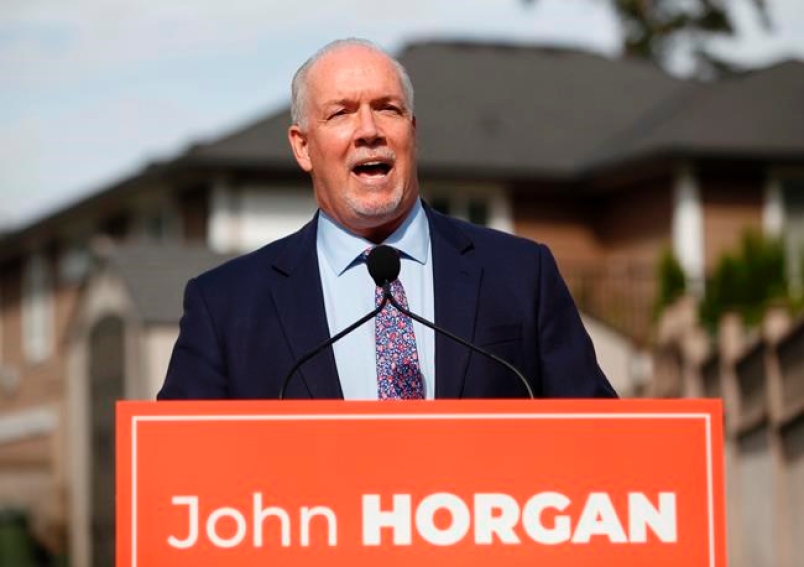 Langford: Premier John Horgan called an early election Monday, saying British Columbia needs stability during the COVID-19 pandemic as opposition leaders accused him of putting politics ahead of the province’s response to the virus.
Horgan said he struggled over whether it is the right time to call an election during the pandemic but there are significant health and economic challenges facing the province with an unstable minority government.
B.C. has a fixed election date set for October 2021, but Horgan said to wait another year would be time wasted.
“I believe the challenges we face are not for the next 12 months, but indeed for the next four years and beyond,” the NDP leader said at a news conference in his Victoria-area riding of Langford-Juan de Fuca.
Liberal Leader Andrew Wilkinson and the Green party’s Sonia Furstenau questioned the need for the Oct. 24 election during the pandemic. Both said Horgan was dragging their parties and the people of B.C. into a political battle when the fight should be against COVID-19.
Furstenau, who became the party’s leader a week ago, said Horgan decided to put his political future and that of his government ahead of the people of B.C.
“This is not a time when we put the interests of a political party ahead of the British Columbians who need to know that we are here to serve them,” she said at a news conference. “I’m disappointed that this is what John Horgan has chosen to do and I fully intend to hold him accountable for this decision.”
Wilkinson said the election isn’t wanted by anyone in the province, except for the New Democrats.
“To make this completely clear: think about why we’re having this election. It’s not necessary,” Wilkinson told reporters. “The goal for the NDP is to secure their own employment. The picture here is we’ve got a government cynical enough to put us through a general election in the middle of a pandemic.”
Wilkinson is an experienced politician, holding a variety of cabinet jobs in the previous B.C. Liberal government. But this is his first campaign since becoming party leader in 2018.
The province’s minority NDP government took power in 2017 after signing an agreement with the Greens, but Horgan said political stability is needed and that is what he is seeking now.
Furstenau rejected Horgan’s comments that Green opposition to NDP legislation during the spring session of the legislature contributed to his decision to seek a majority mandate, adding that the agreement the party signed “didn’t stipulate utter and total obedience to the NDP.”
Horgan said the issues of 2017 also aren’t the same as 2020, citing the global pandemic and the economic upheaval it has caused as examples of what has changed.
“I have never been more confident that this is the time to ask British Columbians where they want to go. Unprecedented times call for unprecedented actions.”
Horgan said the campaign will be different than past elections where handshakes, door knocking and public rallies were normal political activities, but the parties will find ways to interact with voters.
“It’s not going to be like any other campaign, without any doubt,” he said.
The NDP and B.C. Liberals were tied with 41 seats each when the legislature was dissolved by Lt.-Gov. Janet Austin. The Greens held two seats, there were two Independents and one seat was vacant.
Horgan said he’s been speaking with provincial health officer Dr. Bonnie Henry about the pandemic, but didn’t consult with her about calling an election.
“The final decision rests with me and I take full responsibility for it.”
The number of cases of COVID-19 have been rising in the province, with 366 new cases since Friday.
But Horgan said the biggest problem over increasing COVID-19 numbers is people not following Henry’s directives over the last seven months.
“That is the challenge with respect to COVID-19, not whether or not we ask people to go to a polling place over the course of a number of days or if they’re uncomfortable with that, to vote from home.”
New Brunswick just concluded an election with 66 per cent turnout and Saskatchewan’s campaign will be underway in a few days, so other jurisdictions are having elections, he said.
Horgan said Finance Minister Carole James will be administering the province until election day. She is one of seven NDP cabinet ministers not seeking re-election.
Horgan noted that seven Liberal members of the legislature are also not running again and former Green leader Andrew Weaver is leaving politics as well.