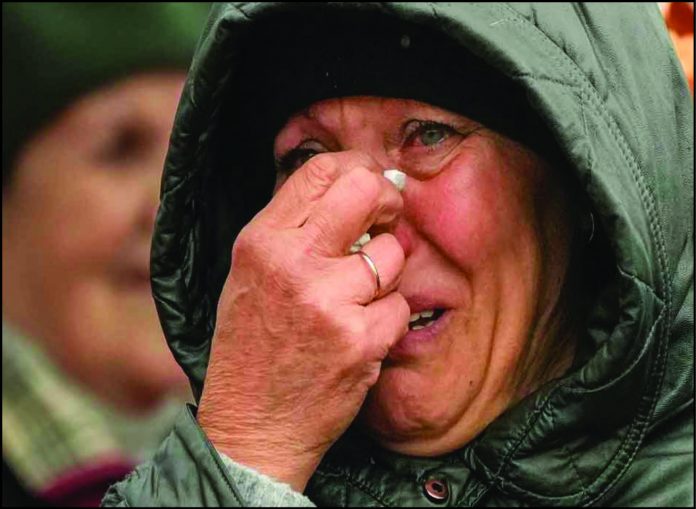 Kyiv (AP): Western governments were preparing Wednesday to impose tougher sanctions against Russia, as Ukraine documents and investigates widespread killings of civilians and other alleged war crimes.
Ukrainian President Volodymyr Zelenskyy kept up demands for war-crimes trials for Russian troops and their leaders while warning they were regrouping for fresh assaults on Ukraine’s east and south. The Ukraine military said Russia was preparing for an offensive in Ukraine’s east, with the aim “to establish complete control over the territory of Donetsk and Luhansk regions.’’
Overnight, Russian forces attacked a fuel depot and a factory in Ukraine’s Dnipropetrovsk region, the region’s governor Valentyn Reznichenko said on the messaging app Telegram early Wednesday. The number of casualties was unclear.
“The night was alarming and difficult. The enemy attacked our area from the air and hit the oil depot and one of the plants. The oil depot with fuel was destroyed. Rescuers are still putting out the flames at the plant,’’ Reznichenko wrote.
Police in the Romanian capital Bucharest said a car rammed the gate of the Russian Embassy early Wednesday, bursting into flames and killing the driver. There was no immediate information on a possible motive or other details.
In Ukraine’s eastern Luhansk region, shelling of Rubizhne city on Tuesday killed one person and injured five more, its governor Serhiy Haidai said on
Telegram.
Parts of Donetsk and Luhansk have been under control of Russia-backed rebels since 2014 and are recognized by Moscow as independent states. So far, Ukrainian forces have been holding back Russian troops trying to push east but remain outnumbered in both troops and equipment, Zelenskyy said in a video address to his country late Tuesday.
Evidence of what appears to be intentional killings of civilians in Bucha and other towns before Russian forces withdrew from the outskirts of Kyiv has drawn a global outcry. Western nations have expelled scores of Moscow’s diplomats and are expected to roll out more sanctions Wednesday.
They would include a ban on all new investment in Russia, a senior U.S. administration official said, speaking on condition of anonymity to discuss the upcoming announcement.
The EU’s executive branch, meanwhile, proposed a ban on coal imports from Russia, worth an estimated 4 billion euros ($4.4 billion) per year. It would be the first time the 27-nation bloc has sanctioned the country’s lucrative energy industry over the
war.