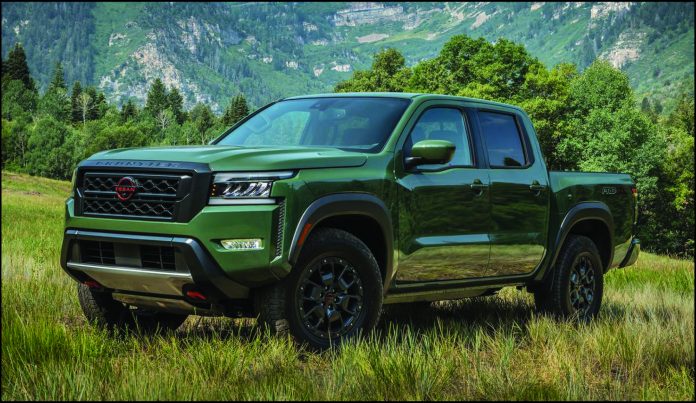 For 2022, Nissan has come out with a new version of its venerable Frontier pickup. The Frontier has been a solid performer for Nissan and now comes with some new engineering upgrades, cosmetics, and interior features. When it comes to the styling of the 2022 Nissan Frontier, there is now a more edgy squared-off look to the design with an attractive high waisted defined look. Meanwhile front and rear LED exterior lighting is standard.
While the Frontier lagged behind its competitors for a few years, the 2022 Frontier has major changes. The same fully boxed frame as the outgoing model is used, but there are now new hydraulic mounts that reduces road vibration by 80 per cent. The chassis also has a larger-diameter front stabilizer bar, and a rear stabilizer bar has also been added for better handling. The rack-and-pinion steering gear ratio has been revised for improved response and there are multiple noise reduction improvements.
A choice of body configurations is available, with either a King Cab or Crew Cab, five-foot or six-foot bed. The King Cab (extended cabin) comes with the long bed; and the crew cab is available with either bed depending on the trim. Added to the bed on all trims for 2022 is a smoother operating damped tailgate and the bed height has been increased by 2.6 cm. The 2022 Nissan Frontier price starts at $39,998 for the King Cab S and going up to $47,498 for the off- road equipped Pro-4X Crew Cab. The Canada only Pro-4X King Cab starts at $45,598.
In terms of load and towing ability, the Frontier can tow up to 6,490 lbs when properly equipped, and a trailer-sway control system is standard, which automatically activates the brakes if the trailer begins to waggle. Cargo capacity is up to 1,430 lbs. The motivation behind the Frontier is a 3.8-litre V6 engine paired with a nine-speed automatic gearbox. The new engine makes 49 horsepower more than the previous generation.
The interior, once a weak point of the previous Frontier is all new and is a big improvement over the last model with better driver ergonomics, design, and comfort. Comfortable seats front and rear are present, and the instrument cluster looks nice with a sporty design. An eight-inch centre touchscreen is standard; while a nine-inch screen is available, which is the biggest in this truck segment. A new centre console places the shift lever more conveniently closer to the driver. Interior storage is good with a four-litre storage compartment in the redesigned center console, 6.5 litres of storage can be found in the front doors, 5.7 litres in the rear doors, and there is handy extra storage under the rear seats.
Equipment levels are good. Apple CarPlay and Android Auto are standard, as are Type A and Type C ports, and two 12-volt outlets. A 360-degree birds-eye camera view, which has an off-road mode while moving up to 10 km/h is also available, Wireless phone charging, a Wi-Fi hotspot, and NissanConnect, also arrive on some models. The rear legroom and shoulder room in the four door Crew Cab is adequate while the King Cab models have smallish folding rear jump seats.
In terms of safety, Nissan’s Safety Shield 360 suite of driver aids is standard across all trims, and includes: forward collision warning, intelligent cruise control, lane-departure warning, rear cross traffic alert, and rear auto braking.
On the road, the Frontier offers decent enough handling with its rack and pinion steering and some off-road ability with its 2 Wheel and four-wheel drive modes. The engine has strong low- to midrange power and is smooth in operation. The transmission shifts almost seamlessly, though it has a slight delay on passing. But nothing of great concern. A four-wheel limited-slip system transfers power to the wheels that need it when traction is compromised. Hill-start and hill descent assists are standard. Even over potholes, and rougher than normal roads, the Frontier remains largely composed. However, this is a truck and Frontier can be a tad jiggly when not loaded with passengers and cargo. On the plus side, the new body mounts mean far less cabin noise than the previous Frontier. In terms of handling, some drivers may find the revised steering set up a bit heavy, especially at low speeds.
The Frontier offers fuel economy numbers of 13.7L/10.6L/12.3L city/hwy/combined. To sum up, the new improvements were long overdue and add a whole lot more to this tough, versatile truck. Also, note that you can spec this truck with a slew of option that make it even more luxurious. Overall, the new Frontier is an excellent truck for work or play. Highly recommended.