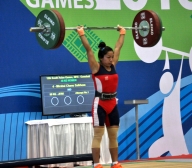 Gold Coast: Star weightlifter Mirabai Chanu won the first gold for India at the 21st edition of the Commonwealth Games with a power-packed performance in the women’s 48 kilogram category here on Thursday.

The Manipuri powerhouse left the competition far behind by setting Games and Commonwealth records in the snatch, clean and jerk as well as the total.

She registered 86 kg in the snatch and 110 kg in clean and jerk for a total of 196 kg. Such was her dominance that she net a record record in each of her six lifts in the competition.

The reigning world champion thus obliterated the previous Games record of 175 kg set by Nigeria’s Augustina Nwaokolo at the 2010 edition by a considerable distance.

Her previous personal best was 194 kg which she had set during her title winning run at the World Championships last year.

Marie Hanitra of Mauritius finished a distant second with a total of 170 kg while Dinusha Gomes of Sri Lanka took bronze with 155 kg.

Chanu started off on a rousing note by breaking the existing Games record with a lift of 80 kg.

She went on to break the record another two times with successful attempts of 84 kg and 86 kg, the latter being her new personal best.

That gave her a massive lead of 10 kilograms over second placed Marie at the end of the snatch session.

The Indian star started the clean and jerk session in similar fashion, lifting 103 kg in her first attempt to take the lead straightaway.

Another successful lift of 107 kg consolidated her position at the top. The Manipuri went on to post a new personal best with 110 kg in her third and final attempt to close off a dominating performance.