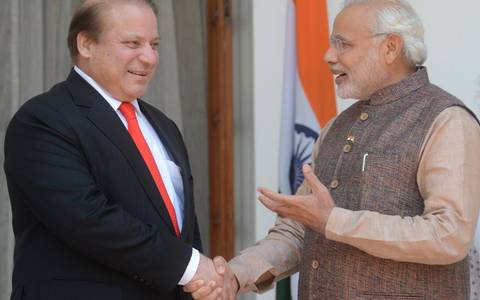 New Delhi, April 8 (IANS) Prime Minister Narendra Modi on Wednesday thanked his Pakistani counterpart Nawaz Sharif for his country’s assistance in evacuating 11 Indians from strife-torn Yemen.
“I welcome our 11 citizens who’ve returned from Yemen with assistance from Pakistan. Thank you PM Nawaz Sharif for your humanitarian gesture,” according to an official statement from the Prime Minister’s Office.
“Service to humanity knows no borders. Glad we helped many countries in evacuation from Yemen.”
“The help India extended included help to our neighbours Bangladesh, Maldives, Myanmar, Nepal, Pakistan and Sri Lanka,” Modi said.
Earlier, Foreign Secretary S. Jaishankar appreciated Pakistan for evacuating the 11 Indians from Yemen, and called it a “generous gesture”.
“It is a very positive, good and generous gesture,” Jaishankar said.
“Pakistan took great trouble and we need to appreciate that,” he said.
“In adversity, the best side of every one comes forward. Everyone has been coming forward to help people. Difficult situations do call for countries to help each other,” he said.
In a display of bonhomie, 11 Indians were evacuated by Pakistan Navy on April 4 from Al-Mukalla port, which is overrun by the Al Qaeda.
Pakistan Navy ship PNS Aslat on Tuesday took the Indians to Karachi along with 171 Pakistanis. The Indian nationals were then flown to their home country on Wednesday.
On Wednesday, the Indians arrived in New Delhi on a special plane. They were received by Pakistan High Commissioner Abdul Basit.
The foreign secretary said India also evacuated 409 nationals of 32 countries, including Pakistan, Bangladesh, Nepal and Sri Lanka.
According to government officials, at least 26 countries, including the US, Britain, Russia and France, apart from Asian nations, sought India’s help in evacuating citizens from war-torn Yemen.