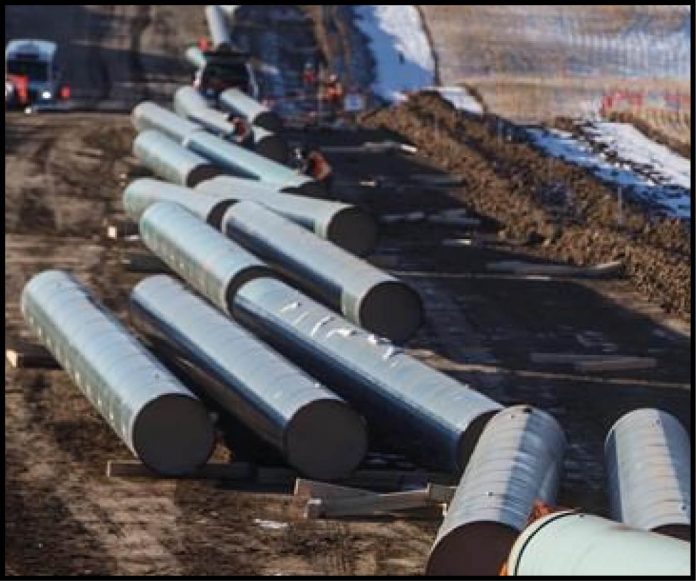 Federal officials feared a repeat of the 2020 rail blockades one month before RCMP enforced an injunction last fall against protests that cut off access to a pipeline construction site in northern British Columbia.
There was also concern that people from other demonstrations over Indigenous land rights had travelled to the site, including “Mohawk warriors.’’
Details of the rising tensions around construction of the 670-kilometre Coastal GasLink pipeline are contained in briefing notes prepared for federal officials ahead of a meeting with RCMP Commissioner Brenda Lucki.
The documents were released to The Canadian Press through federal access-to-information legislation.
They outline how Lucki requested the Oct.19 meeting with department heads of Indigenous Services Canada and Crown-Indigenous Relations to discuss the “recent escalation’’ of protests to the natural gas pipeline under construction in Wet’suwet’en territory.
Wet’suwet’en hereditary chiefs have opposed the pipeline for years, while 20 First Nations band councils along the pipeline route have signed off on the project.
Those opposed to the pipeline have set up blockades along forest service roads to stop workers from getting through and have been confronted by police and court injunctions granted to its owner, TC Energy.
The briefing notes show federal officials were watching the situation carefully last October after they noted activity was once again picking up.
“Small-scale protests have been held in recent days in various parts of the country in support of the hereditary chiefs. There is a risk that protest activities could spread and possibly escalate to levels seen in early 2020,’’ officials wrote.
In February 2020 _ weeks before the arrival of the COVID-19 pandemic forced the country into its first lockdown _ protesters began blocking rail and other major transportation routes in support of those arrested by RCMP in northern B.C., as officers enforced the court injunction prohibiting people from blocking access to Coastal GasLink’s construction sites.
One of the most concerning blockades for governments and industry took place on Tyendinaga Mohawk Territory along a stretch of Canadian National rail line between Montreal and Toronto. Police ultimately cleared the site in late February after train traffic had been ground to a halt for several weeks.
Last October, a document titled, “Royal Canadian Mounted Police Situation Report,’’ provided ahead of the meeting with Lucki identified the presence of someone associated with the Tyendinaga blockade travelling to northern B.C., along with four others from Ontario and some U.S. citizens.
“One was involved in the Six Nations protest in Ontario known as ‘1492 Landback Lane,’’’ the report read. There were also “references to ‘war’ against police.’’
“With the latest update and the alleged involvement of members of the Mohawk Nation from Ontario, there is a very likely chance for violence and disruptive sympathy actions across Canada similar or greater than those seen in early 2020.’’
About a month after the Oct. 19 meeting, RCMP cleared another round of blockades set up by members of the Gidimt’en clan, one of five in the Wet’suwet’en Nation. A photojournalist and documentary filmmaker were among those arrested at the site.
In February, RCMP responded to reports of damaged equipment and an attack on security guards at a construction site for the pipeline. Before getting there, the Mounties said officers were stopped on the road by a fire as a group of people allegedly threw flaming sticks at them.
Since then, RCMP have stepped up their presence at a camp on the forest service road leading to the pipeline construction site, with officers visiting between four and eight times daily for the last six weeks, said Sleydo’, a spokesperson for the group organizing the blockades.

By Stephanie Taylor and Brenna Owen
The Canadian Press