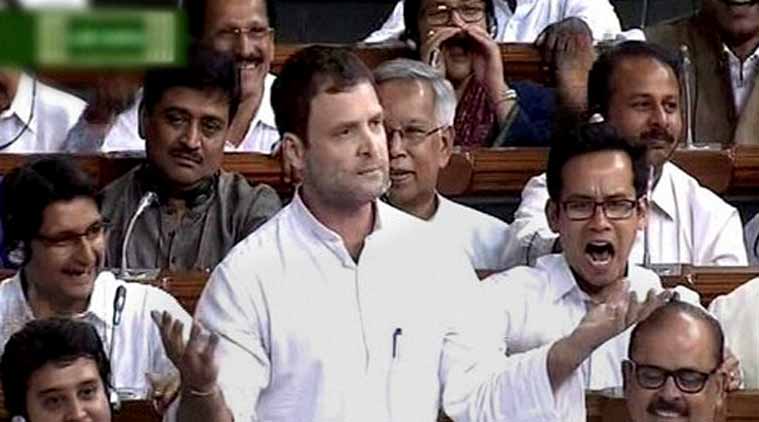 New Delhi, April 20 (IANS) A combative Rahul Gandhi here on Monday accused Prime Minister Narendra Modi of “weakening farmers” to the benefit of industrialists with the land bill ordinance, mounting his second successive attack since returning from 56-day leave of absence.
Parliamentary Affairs Minister M. Venkaiah Naidu, however, rubbished the Congress vice-president’s allegations, reminding him that it was due to the difference in its “words and deeds” in the past that his party was today sitting in the opposition.
Attacking the Modi government on issues concerning farmers in the Lok Sabha during the discussion on agrarian situation in the country, Rahul Gandhi advised Modi to visit them to empathise with them in their distress caused by loss of crops due to unseasonal rains.
Earlier in the day, the government tabled the re-promulgated land ordinance in the house amid protests. The Congress and Trinamool Congress staged a walkout over the issue.
Congress president Sonia Gandhi met farmers at her residence to listen to their concerns about the new land bill later in the day. Sonia Gandhi, who was not present in the Lok Sabha when Rahul Gandhi spoke, later expressed satisfaction at his speech.
Rahul Gandhi, who took part in the discussion for the first time in the budget session, spoke in the tone and tenor of a combative leader to attack the Modi government, as he did at the farmers’ rally at Ramlila Ground here on Sunday.
Though Rahul Gandhi’s party colleagues sought to shield him from repeated interruptions from Bharatiya Janata Party members, he stood up and countered the barbs thrown at him with his arguments.
Rahul Gandhi made repeated attacks on the government, saying it was “hurting” about 60 percent of the people who were dependent on agriculture.
“One thing is clear, your government is ignoring problems of farmers, not listening to labourers. It is government of industrialists. We know this, you also know it… Your government is of big people. It is government of suited-booted people,” he said.
Rahul Gandhi, who repeatedly referred to Modi as “your prime minister”, sought to give the Bharatiya Janata Party leader some suggestions. “Sixty percent people are farmers and labourers. He (Modi) will gain politically if he changes his side.”
“You are hurting the farmers and in the coming times they will hurt you. The biggest strength is in the hands of farmers and labourers,” he said.
Rahul Gandhi said that since Modi is good at political calculation, a question that comes to mind is why is the prime minister allowing 60 percent of the population to get angry?
“There is only one answer. The cost of land is increasing fast. Your corporate friends want it. What are you doing – on one side farmer, labourer will be weakened, will not be able to stand on his feet (with your policies), and then you will use axe of (land) ordinance,” Rahul Gandhi said.
Referring to Congress-led United Progressive Alliance government’s steps to benefit farmers, including increase in Minimum Support Price (MSP) and agricultural credit, Rahul Gandhi said “acche-din government has failed the country”.
Citing figures, he said Modi and his ministers have given varied estimates of crop loss due to unseasonal rains.
As Agriculture Minister Radha Mohan Singh countered him by stating that the figures were based on information from states, Rahul Gandhi said he had a suggestion for the prime minister.
“Why doesn’t not the PM go and see the problems? Crops are lying in markets and these are not being lifted. Farmers are not being given fertilizers,” he said.
The Congress vice president said farmers were the country’s backbone and everything else has been achieved on foundations laid by them.
Later, speaking to reporters outside parliament, he said he did not get a reply from the government.
With two hard-hitting speeches on successive days since his return, the 44-year-old leader appeared willing for the active role his party leaders have been wishing him to play for years.
Meanwhile, the government rubbished Rahul Gandhi’s allegations, as Parliamentary Affairs Minister and senior BJP leader M. Venkaiah Naidu said the Modi government was committed to the welfare of the poor and the farmers.
“Your words were for the poor and deeds for the rich, that’s why you are there and we are here,” Naidu said pointing to the opposition benches.
“The prime minister has made it clear that rural people and poor are our priority,” he said.
Naidu said the Modi government has launched several schemes for the welfare of the poor and increased relief and compensation norms for the farmers whose crops have been affected.