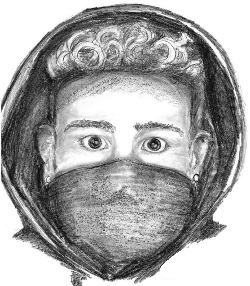 The Surrey RCMP is seeking the public’s assistance in identifying an alleged robbery suspect from an incident that occurred in early April in the City Centre area.

On April 6th, just before 4:00pm, a man walking in the 10900 block of 132nd Street was robbed at knifepoint and threatened by a suspect who made off with the victim’s cell phone and wallet. Thankfully the victim was not injured and was able to contact police shortly after the incident. The suspect fled the area prior to police arrival and has not been identified.

Surrey RCMP General Duty officers are leading this investigation. Using the victim’s description of the suspect, a composite sketch was created by a forensic artist. The suspect is described as a light skinned African American male, in his late teens, 6’0 tall, 150 lbs, with curly bleach blonde and black hair. The suspect was wearing a black hoodie, tight black jeans, black shoes, a purple and white bandana over his mouth, and a nose ring and diamond earrings.

If you see this suspect, call 9-1-1 immediately, says Corporal Scotty Schumann. “When walking alone make sure you’re aware of your surroundings. Walking with confidence and knowing where you’re going will reduce the likelihood of being victimized.”