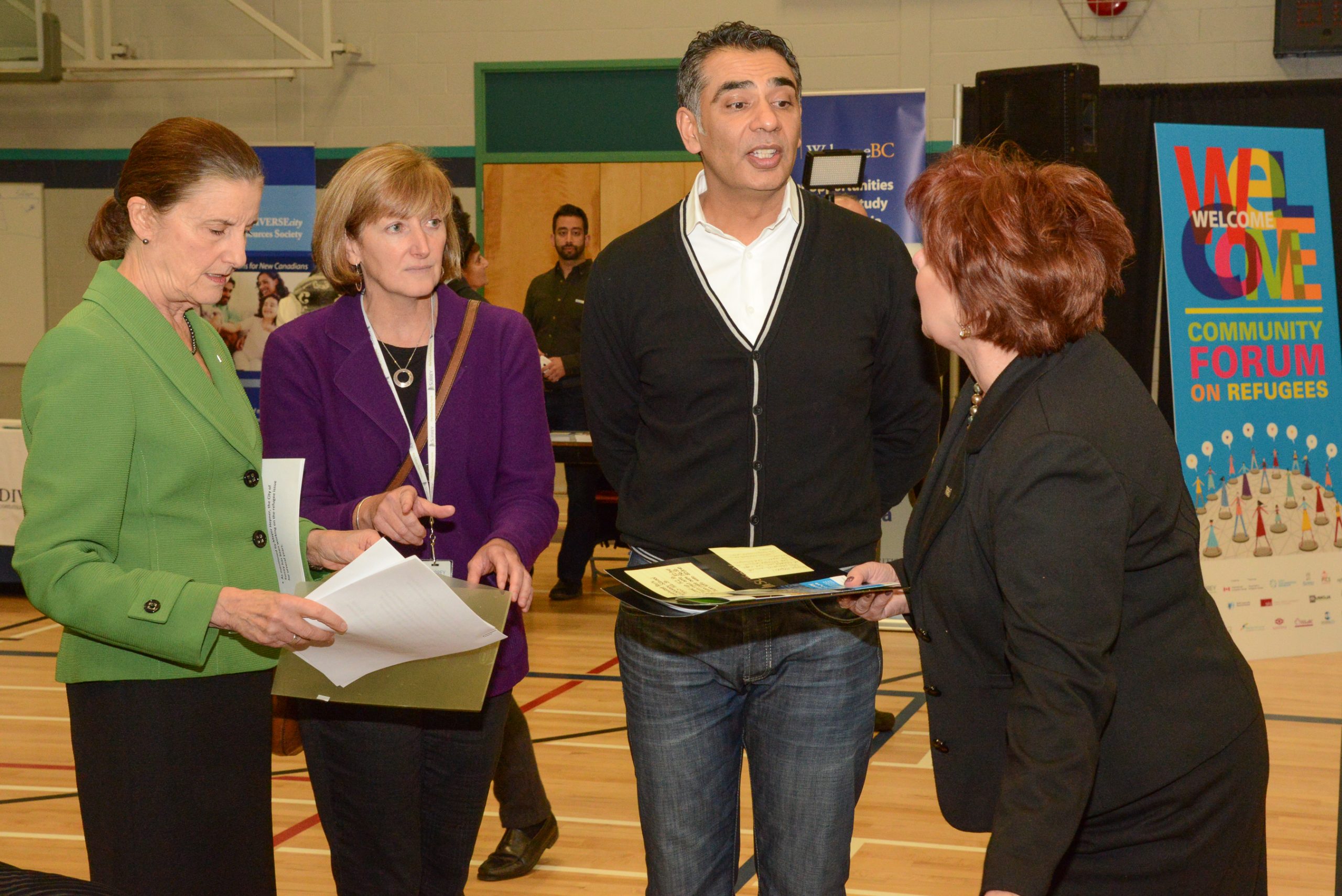 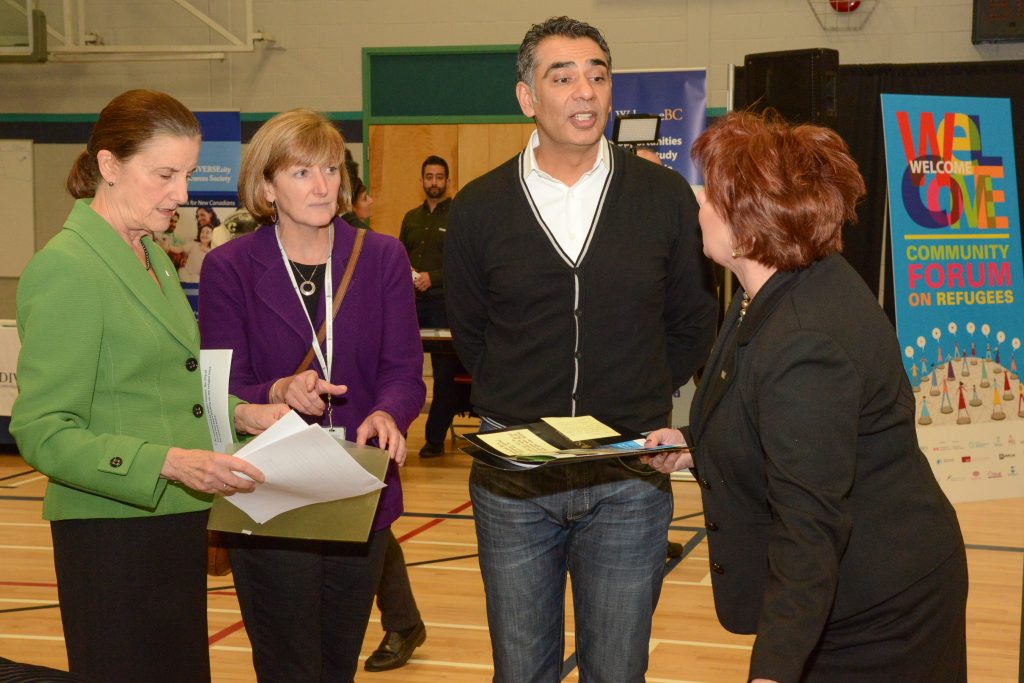 Surrey: A public forum on Syrian refugees expected to come to Surrey, drew close to three hundred people to Fleetwood Park Secondary School on Wednesday night. The crowd, including many who were refugees or immigrants themselves came out either to find out more about the Syrian refugees and how to assist these newcomers, as well find out about all the support services available in Surrey. 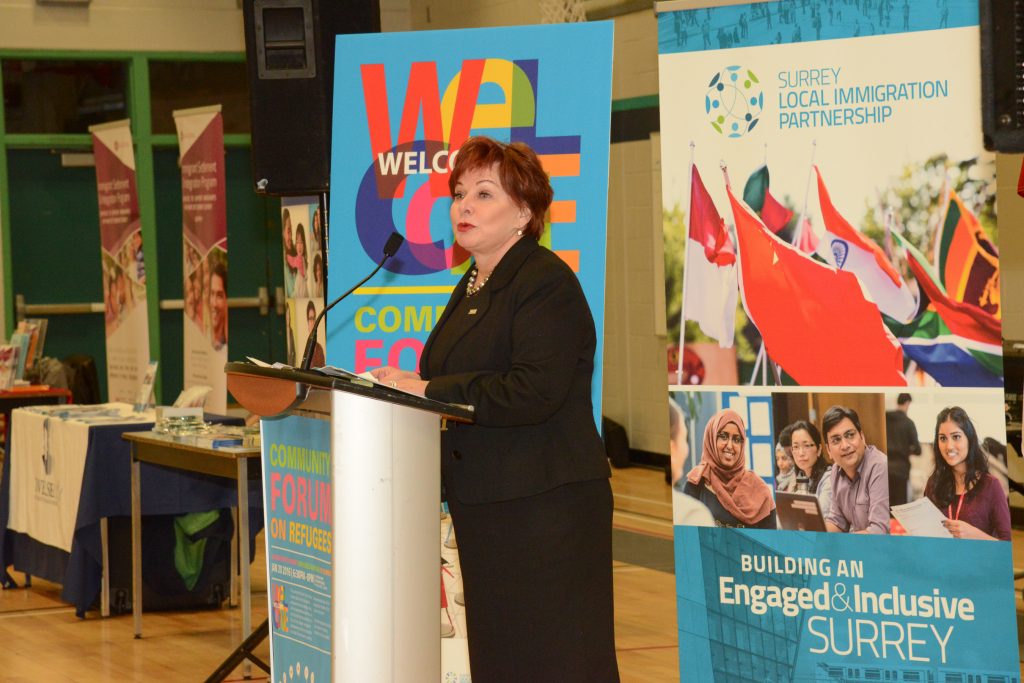 Mayor Linda Hepner kicked off the evening by reminding the audience that the refugees who are still to arrive as well as those who are here already, have experienced untold loss and personal tragedy and that we need to present the city as a welcoming environment.

She told of a visit to the Welcome Centre, where one father told her how he travelled on foot with his four children, to reach the Jordanian border, and how grateful they are to be here in Canada.

The refugee families, which number over eighty children among them, are housed in a hotel in Surrey.

“Every single parent I spoke to said they were anxious to learn the customs and speak English and have their kids in school, and to get on with being a part of the fabric of Canada,” said Hepner. “I believe the speed of success of becoming full participants in this country depends on two things, a wish to integrate, which I saw all too well this afternoon, and the agencies that provide the individual assistance in making that happen. I know in Surrey we are prepared to do our part.”

Mayor Hepner recognized that the young children had little to do in the Welcome Centre and has asked city staff to arrange for temporary passes so they might enjoy both the rec centre and pools. 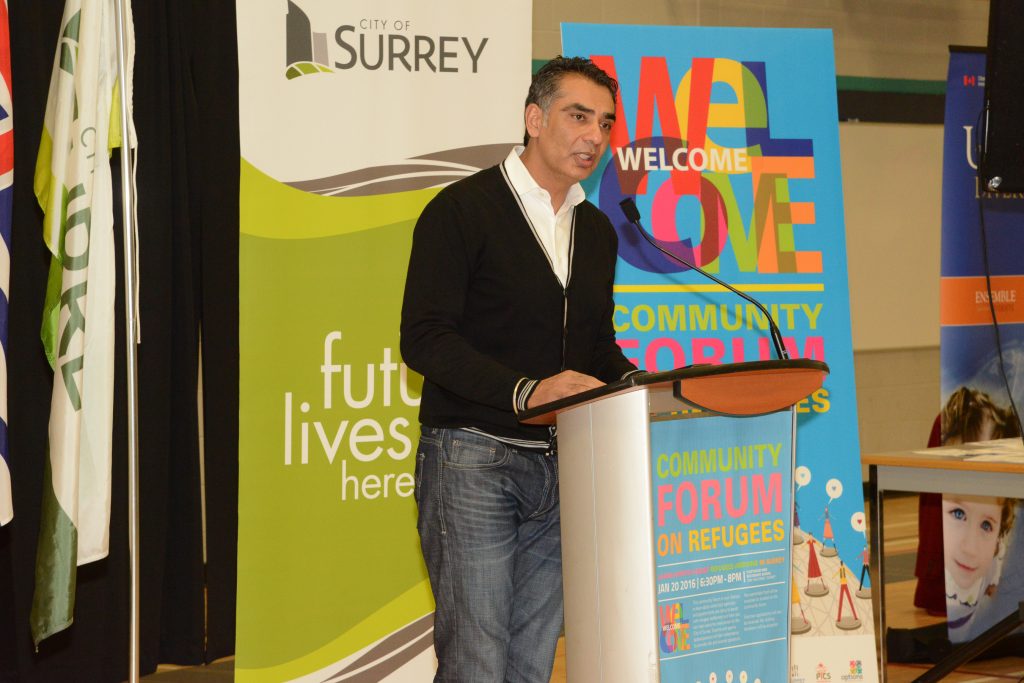 The MLA for Surrey-Tynehead, Amrik Virk, who is also Minister of Technology, Innovation and Citizens’ Services told the crowd that the province had contributed money for services: 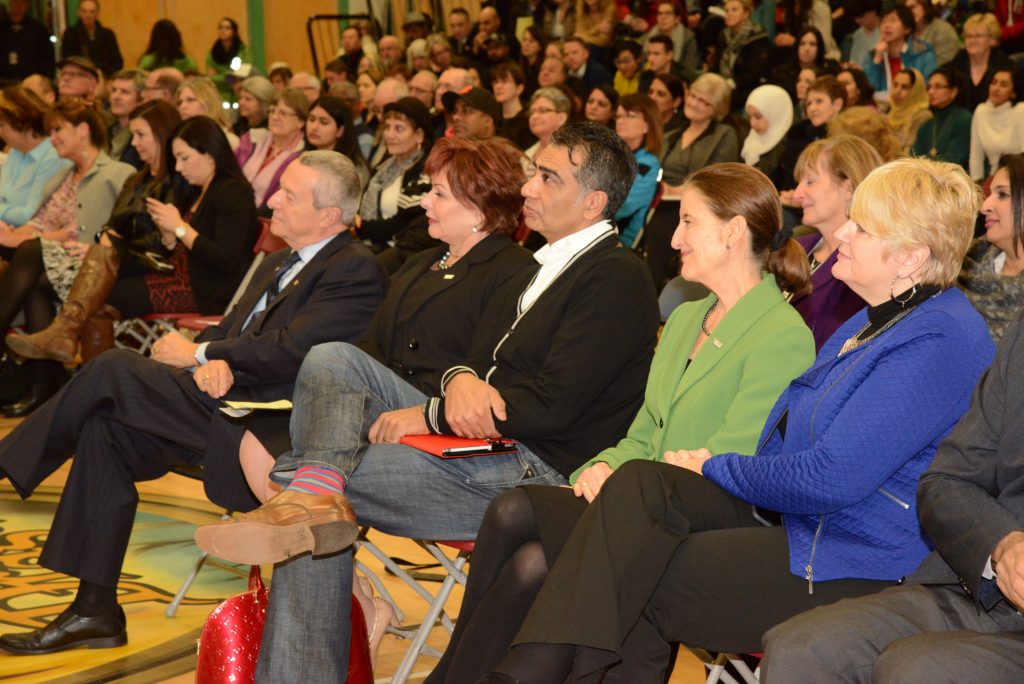 Fleetwood MLA Peter Fassbender, Minister of both Translink, and Sport and Community Development, in reply to a question about refugees running out of money for food, said that emergency funds were available for such circumstances.

He said they are also working on a new program called Family Links that arose as a result of the Syrian Community in Canada expressing an interest in family reunification, by facilitating Syrian refugees bringing their relatives, who fled Syria, to Canada but lack the means to pursue private sponsorship. For more information, people should check out the IRCC website at http://www.cic.gc.ca/english/refugees/welcome/overview.asp

Chris Friesen, the Director of Settlement Services of Immigrant Services Society of BC (ISSBC), which is the primary agency handling the refugees, reported that in the last 5 weeks they had opened seven temporary centres and that ISS had brought on 50 additional Arabic speaking staff.
He offered some statistics about the refugees:

“Our specific target,” said Friesen, “includes women at risk, lone parent families, children with physical impairments and those who suffer with some trauma conditions. But the one thing they have in common is their gratitude to this country for giving them the opportunity to rebuild their lives.”

The big push right now is for permanent accommodation in Surrey, Delta, Coquitlam, Burnaby and New Westminster. ISS has a team of seven fulltime staff working on that challenge right now. If anyone in the public can help with permanent accommodation, please contact the Immigrant Services Society at 604.684.5683 or go online at issbc.org. 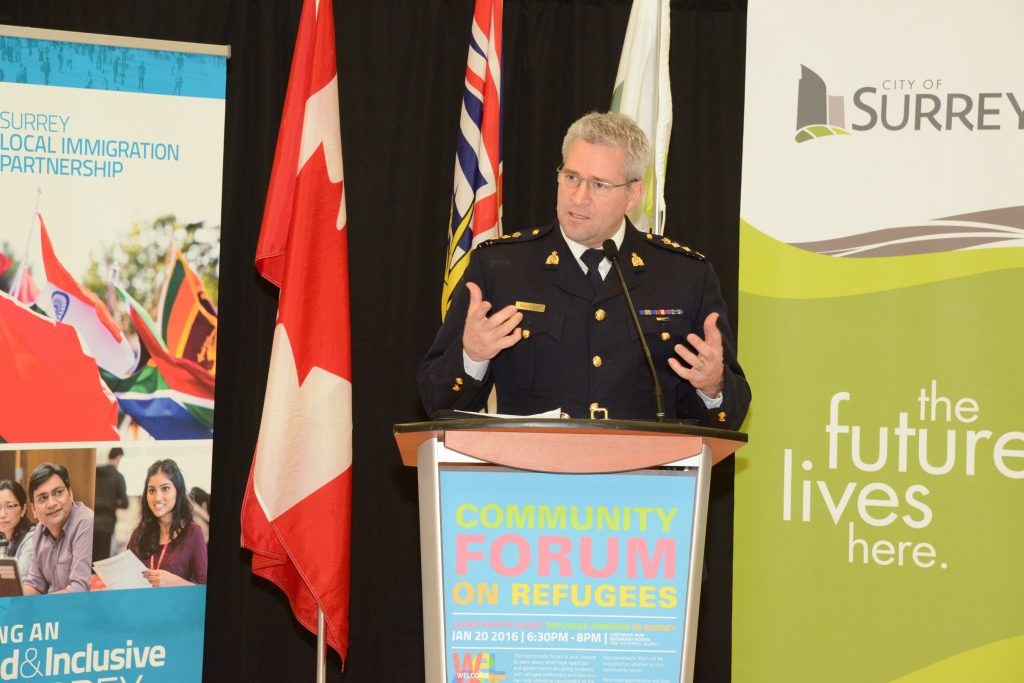 Bill Fordy, Chief Superintendent in charge of the Surrey RCMP said “It’s important that as a community, each of us recognize that current stereotypes of newcomers or refugees, might perpetuate unnecessary fear. One of those misconceptions is that they pose a threat to our national security. From a security perspective the newcomer population is a low risk, specifically youth, women and the elderly.”

“In preparing the refugees still overseas, the RCMP has been deployed to Amman Jordan, in order to engage with the Syrian refugees and gain an understanding of their needs and expectations from a law enforcement perspective, to answer questions they may have about law enforcement in Canada as well as to share with them correspondence and material that has been designed here in Surrey and translated into Arabic. Ultimately it’s about building positive relations with a population that traditionally sees police as corrupt, as agents of the ruling regime and something to be feared as opposed to being trusted.”

Once the refugees have adjusted to their new community, Surrey RCMP will engage with them more proactively. Depending on their specific needs at the time, they will conduct newcomer forums, school talks and a social media campaign to educate Surrey residents about their new neighbours.

Judy Villeneuve, a Surrey City Councillor, Co-Chairs the Surrey Local Immigration Partnership (LIP) with Anita Huberman CEO of the Surrey Board of Trade. It has been working on the refugee issue for several years and is responsible for the research and consultations in the development of the Immigrant and Refugee Settlement Strategic plans, for those refugees coming to Surrey.

One of the most anticipated speakers of the evening was Mateen Aminie, a 19 year old immigrant who arrived in Canada when he was 13 years old. He works for Surrey Crime Prevention Society and has the goal of becoming a police officer. He explained his career choice was the result of a serious assault he suffered at the age of fourteen.

“I was returning from work when I was severely beaten,” said Aminie. “With the help of Surrey RCMP we got through it. Overseas people fear and hate the police, and I came with the same perspective. But when I came into contact with the RCMP over the assault, it totally blew my mind. It changed my mind how helpful and dedicated they were in doing their job. I experienced being a victim of crime and not knowing how the legal system works. I went through it myself and I know it’s stressful, but that’s one of the reasons I’m here tonight talking about my experience

“I think Canada is the best country in the world,” Aminie said. “I’m originally from Afghanistan, but I was born in Pakistan. I never had any status. Canada was the first country to give me status, and it’s an honour for me to be part of this amazing country and I’m looking forward to serving this country one day.”

There was a large representation of the city’s social agencies including The Surrey School District #36, DIVERSEcity, SUCCESS, PICS, ISSBC, PCRS, and the Muslim Food Bank, offering many opportunities for the audience to interact with those agencies.

It is obvious that a great many people are concerned that the newcomers have a positive experience from the start, with many people and organizations prepared to contribute everything from material goods to time and talent to participate in informal Conversational English meetings at various venues. For further information on volunteering, contact any of the mentioned agencies. 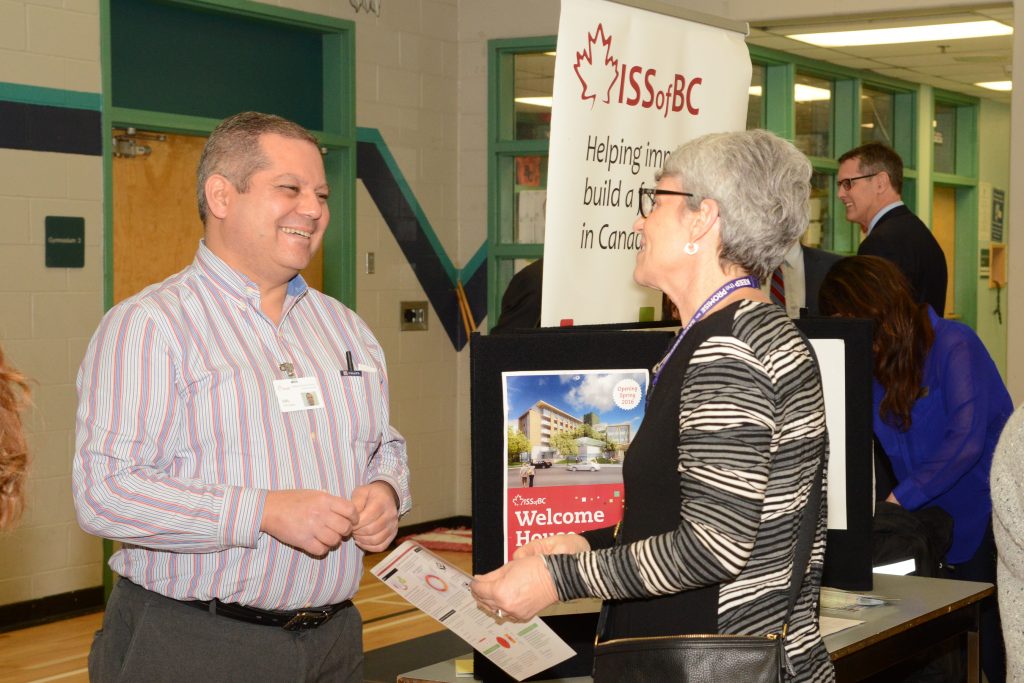 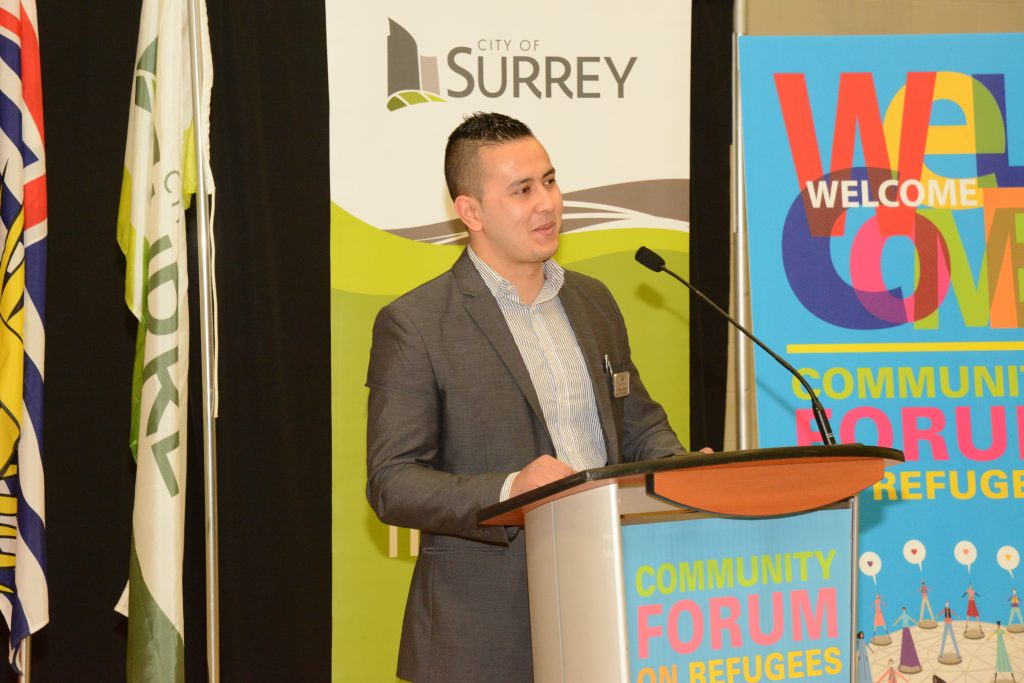 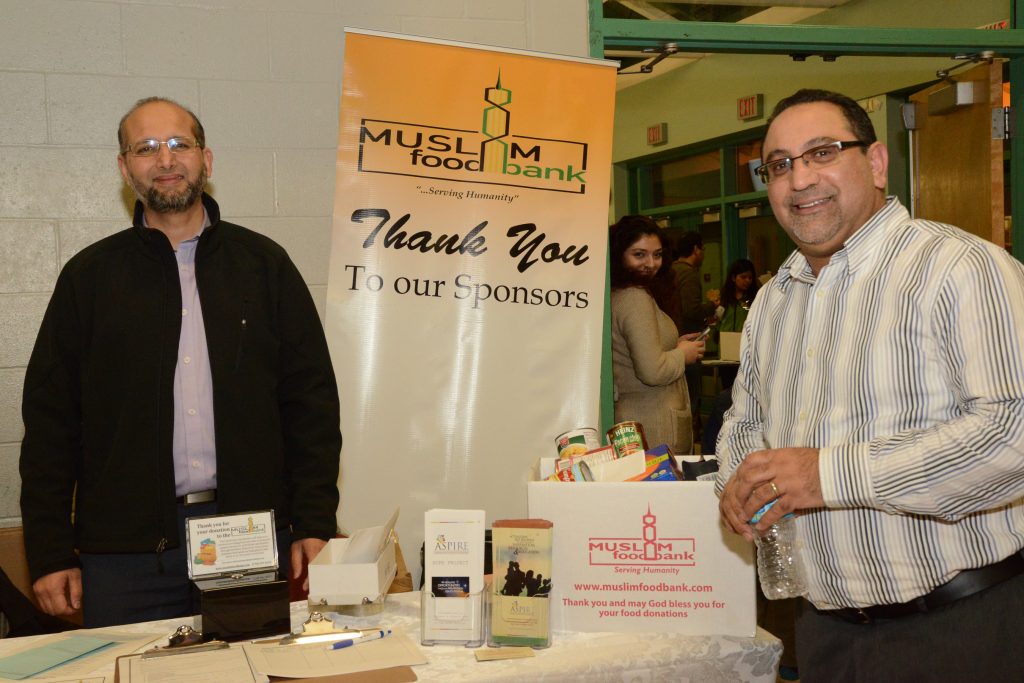