Asian Journal
Home News Rob Ford has tumour growing on bladder, unsure if it is cancerous

By Liam Casey, The Canadian Press 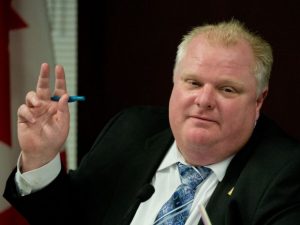 Toronto: Former Toronto mayor Rob Ford has a tumour growing on his bladder, just a month after declaring he was tumour free following surgery to remove one in May.
On Wednesday, Ford sent a tweet thanking his supporters for their “continued thoughts and prayers.”
“I remain optimistic that I will be able to overcome this setback,” he said.
The city councillor was experiencing abdominal pain and recently underwent testing at Mount Sinai Hospital in Toronto, according to a statement sent by his office.
Ford, who was diagnosed with a rare type of cancer in September 2014, is awaiting test results to determine if the tumour is cancerous and if it’s related to his previous cancer, the statement said.
“Councillor Ford will be undergoing additional treatments to address this new tumour,” the statement said.
Ford had a cancerous tumour removed from his abdomen in May and last month said he was cancer free, “but not out of the woods yet.”
Ford was campaigning for re-election when he was first diagnosed with cancer last September.
He abandoned his mayoralty bid and successfully ran for a council seat instead.
Ford underwent surgery in May following several rounds of chemotherapy and radiation.
Ford garnered international attention when the Toronto Star and U.S.-based news site Gawker reported that he was seen on video smoking what appears to be crack cocaine and making racist and homophobic comments.
Nearly six months later Ford admitted to smoking crack cocaine in one of his “drunken stupours.”