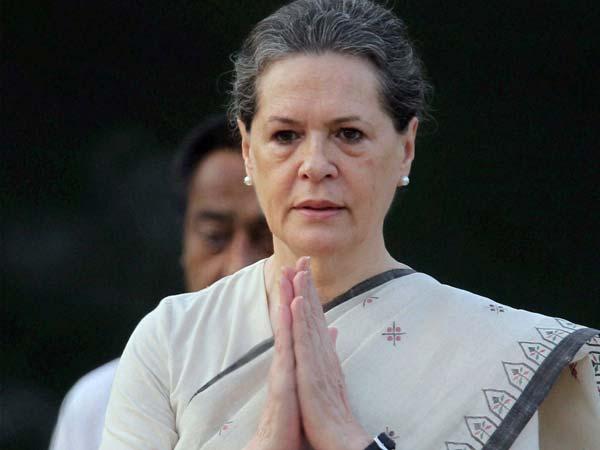 New Delhi: Congress President Sonia Gandhi on Tuesday launched a scathing attack on the Narendra Modi government, saying that many sections were living in fear and that liberty of the individual was being daily trampled upon by anti-social elements and self-appointed vigilantes.

Addressing a special Congress Working Committee meeting here on the 75th anniversary of the Quit India Movement, Gandhi highlighted the party’s role in the freedom struggle and took a swipe at the BJP on the issue of nationalism.

“Today many sections live in fear, none more than the minorities, the Dalits, the tribals and women. Not a day passes without an incident where the liberty of the individual has not been trampled upon by anti-social elements or self-appointed vigilantes,” she said.

Gandhi accused the government of encouraging vigilantes and said there was threat to the country’s pluralism.

“Far from curbing their onslaught, the government of the day encourages and empowers them to flout the rule of law and unleash oppression. All this taken together is the biggest threat to liberty, and is the enemy of pluralism and diversity.”

She said the Quit India movement was a reminder for the party that “brute force” can and must be resisted in the name of freedom and called upon party workers to persevere at time when the party is facing multi-faceted challenges.

“Even when the odds appear to be against us, and the adversary appears all-powerful, we can succeed if we persevere in fighting for the India we believe in and cherish,” she said.

Gandhi said Congress must never bow before those “who assault the liberty of the individual and of society” and must always remain on the frontline in defence of liberty and numerous values associated with liberty, and the institutions that go with it.

“This is the task history enjoined upon us, to fight every inch of the way until we prevail and re-establish the values on which free India was founded and built since 1947,” she said.

Attacking the BJP, Gandhi said political descendants of those who had collaborated with the colonial government were holding high office.

“While we salute the patriots, we must not forget that there were organizations and individuals who opposed the 1942 movement and actually collaborated with the colonial government. Their political descendants are the very people who today hold high office and have arrogated to themselves the role of torch bearers of our freedom,” she said.

Gandhi said liberty is the lifeline of democracy and takes within its sweep, freedom of speech, freedom to dissent, freedom of choice, freedom of worship, the rule of law; equality and social justice.

“If any of these values is impaired, liberty itself will be diminished and curtailed,” she said.

Gandhi said the country has travelled a great distance since 1942 but added that the party was deeply anguished “by the assault on the freedoms that our people have enjoyed since”.

She said the day was special in the history of India as also for the Congress as Mahatma Gandhi gave the call to launch the final and decisive phase of the struggle for independence 75 years back.

She said his call, “Do or Die”, was a clarion to the party and to the freedom fighters and the entire leadership of the Indian National Congress was arrested and imprisoned shortly after August 8, 1942.

She recalled struggles of those who had been jailed and those who sustained the movement from underground in spite of brutal repression inflicted on them by the British authorities.

In his remarks, former Prime Minister Manmohan Singh expressed deep concern about India’s youth and farmers and said multiple problems continue to persist after demonetisation and implementation of the Goods and Services Tax.

Congress Vice President Rahul Gandhi was not present at the meeting of the CWC, which is the highest decision-making body of the Congress. The meeting was attended by party’s senior leaders.