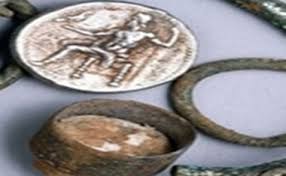 Jerusalem, July 14 (IANS/EFE) An anonymous thief returned two artefacts to an Israeli museum on Monday after having stolen them 20 years ago, leaving with the returned goods a short note that read: “they have brought me nothing but trouble”.
The Israel Antiquities Authority (IAA) said on Monday that the two pieces are 2,000-year-old sling stones that were left at the Museum of Islamic and Middle Israeli Cultures near the southern Israeli city of Beersheba.
The pieces will be transferred to the Department of National Treasures at the AAI.
An employee found the relics one week ago on the grounds of the museum, placed inside a bag along with a typed note indicating the artefacts nature and origin.
“I stole them in July 1995, and since then they have brought me nothing but trouble. Please, do not steal antiquities!” read the note written in Hebrew.