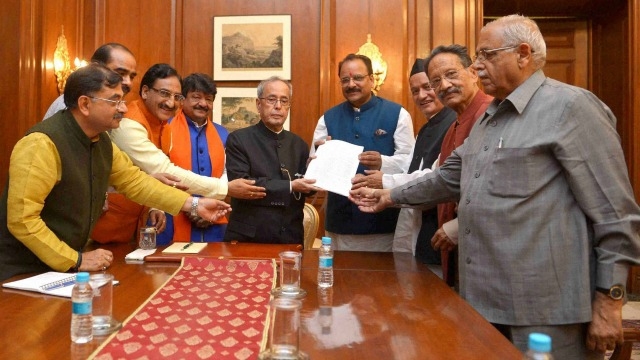 New Delhi/Dehradun, March 21 (IANS) The political crisis in Uttarakhand on Monday reached the president’s house, with the BJP seeking dismissal of the Harish Rawat government and the Congress accusing the Centre of dismantling opposition governments in states, especially those ruled by the Congress.

A delegation of BJP leaders, headed by general secretary Kailash Vijayvargiya, marched from Vijay Chowk to Rashtrapati Bhavan and met President Pranab Mukherjee and sought dismissal of the Uttarakhand government.

However, the nine rebel Congress leaders were not part of the delegation.

“We requested the president to direct the governor to dismiss the Uttarakhand government and to give us time to prove our majority on the floor of the house. We have the support of 36 MLAs (in the 70-member house),” Vijayvargiya told reporters after the meeting.

He said Rawat had no moral right to remain as chief minister but “he is calling cabinet meetings and taking decisions”.

Asked about the rebel Congress leaders not joining the delegation, Vijayvargiya said: “They will meet the president separately.”

Shortly after the BJP delegation met the president, a delegation of Congress leaders also reached the president’s house and apprised him of the political situation in the state.

“We apprised the president of the situation in Uttarakhand and how the BJP with the help of the central government has been trying to dismantle opposition governments in the states especially Congress-ruled states,” Congress leader Ghulam Nabi Azad told reporters after the meeting.

Azad also alleged that in Uttarakhand, Congress leaders, who are now in the Bharatiya Janata Party fold, were held captive by the BJP.

“We informed the president that BJP people took Congress leaders into their bus without their consent and presented them before Governor K.K. Paul. Our MLAs have been held captive by them,” he said.

He claimed that the BJP, with the help of the central government, was now putting pressure on the governor to advance the date fixed by him.

“The governor has asked Chief Minister Harish Rawat to prove his majority on March 28 but the BJP with the help of the Centre is now putting pressure on the governor to advance the date fixed to prove majority,” he said.

Azad also claimed that Rawat will prove his majority on the floor of the house.

Earlier on Monday, Rawat accused the BJP of spreading lies and trying to take political advantage of an internal rebellion in the Congress party.

“The BJP is trying to topple the democratically elected government as they have been doing it in other states. An all-powerful BJP government at the Centre is clearly misusing its position to murder democracy in Uttarakhand,” Rawat said at a press conference.

He also termed the BJP a party of “pseudo-nationalists” and accused it of making unverified and malicious allegations against his government for political gain.

“The BJP has levelled three allegations against me related to the land allotment for the smart city project and helping the mining mafia. I want to say categorically that all allegations are baseless,” he said.

Meanwhile, in a crackdown on rebel leaders, the Congress expelled Saket Bahuguna and Anil Gupta from the party.

Bahuguna had contested the last Lok Sabha elections from Uttarakhand on a Congress ticket.

Sources told IANS that the Congress high command has asked Rawat to go ahead and tackle the rebellion with an iron hand.

The action indicated that the Congress leadership was not in a mood to initiate dialogue with the rebels and that it was even willing to sacrifice the government if needed.

The nine legislators who rebelled against the Rawat government in the state assembly last week have already been served show cause notice by the speaker.

Leader of the rebel group, Harak Singh Rawat has already been sacked as the agriculture minister.