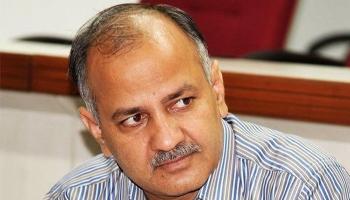 He said that doing so would lead to “widespread indiscipline, insubordination” and a state of “complete paralysis”.

In his letter to Rajnath Singh, Sisodia said: “Implementing MHA’s (home ministry) order will seriously undermine the authority of an elected government and promote widespread indiscipline and insubordination among the DANICS officers, which may result into complete paralysis of Delhi government.”

“In a way, declaration of void ab initio by the MHA appears to be without jurisdiction, especially when the Constitution has entrusted the responsibility of interpretation of statues and expounding of the law to the courts and not to the executives,” he said.

Following the order, officers belonging to the DANICS (Delhi, Andaman and Nicobar Islands Civil Service) cadre — to which Chandra and Garg belong — decided to go on a strike.

The central government, however, declared the suspensions invalid and said the two officers will be deemed on duty.

Sisodia wrote that Delhi’s home minister was an officer “superior” to the special secretaries working under him and therefore has “lawful power” to place them under suspension.

“It may also be seen that communication from the MHA is merely a letter and not an order of the President of India. Implementing the MHA’s order will lead to anarchy and sabotage of functioning of a democratically elected government by the bureaucracy,” the letter added.