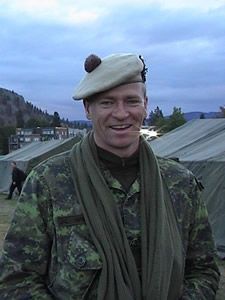 Victoria: A Canadian soldier who almost died after he was axed in the head in Afghanistan will receive an honorary doctoral degree from the University of Victoria.

Capt. Trevor Greene was attacked in 2006 while he was sipping tea with village elders near Kandahar during a peacekeeping gathering.

Greene said before the fall convocation ceremonies Tuesday that the degree holds great significant for him, especially because he will receive it just before Remembrance Day.

He said Nov. 11 is an emotional day for him, just as it is for all Canadian veterans.

Greene said his recovery has been a life-changing struggle, but worth all the effort.

He is now able to walk with the use of a walker and is an advocate and inspiration for brain injury survivors.

He and his wife, Debbie Greene, published his memoir, “March Forth,” in 2012.

Greene was working as a journalist and covered issues related to the disappearances and murders of women in Vancouver’s downtown Eastside before volunteering to serve in Afghanistan.

The uniform Green was wearing the day he was attacked is displayed at the Seaforth Highlanders Regimental Museum in Vancouver.