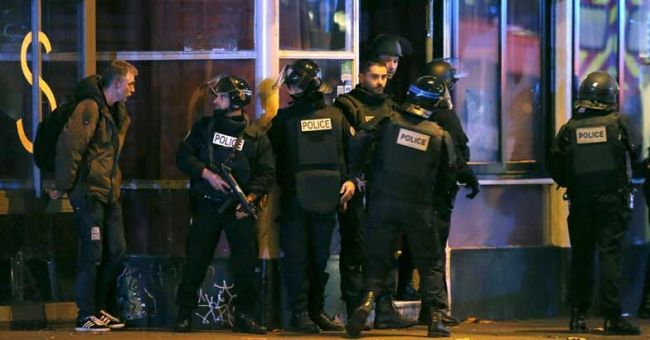 “This is for Syria!” screamed one of the attackers as he sprayed gunfire on Friday night at one of the six sites in Paris, in an obvious reference to France’s combat role against the Islamic State.

The audacious terrorists — all eight of whom were later reported killed — also chose to target a football stadium where President Francois Hollande was viewing a France-Germany match. He was quickly evacuated.

The most horrific of the near simultaneous attacks took place at the Bataclan theatre where the terrorists burst in, opened fire, reloading their automatics at least thrice, took people hostages and, as security forces stormed it, exploded themselves, killing over 100 civilians.

A shaken Hollande declared a state of emergency across the country.

Later, he visited the concert hall and vowed revenge. The terrorists, he announced, would be fought “without mercy”, BBC and French media reported.

On Saturday morning, French security forces announced that all the attackers were dead but a hunt was on for possible accomplices. Residents in Paris were told to stay indoors. The city was swarming with soldiers.

All schools and universities were ordered closed on Saturday. It was the worst incident of violence to rock Paris after World War II.

Indian Prime Minister Narendra Modi, now in Britain, described the attack as “anguishing and dreadful” and said New Delhi stood with the people of France at this tragic hour.

The series of attacks not far from the Place de la Republique and Place de la Bastille struck at the heart of the capital at Friday night when cafes, bars and restaurants were doing peak business, BBC said.

Another target was the Stade de France, on the northern fringe of Paris, where President Hollande was among the 80,000 people watching a friendly tie between France and Germany.

The worst carnage took place on the 1,500-capacity Bataclan concert hall where gunmen opened fire on people watching US rock group The Eagles of Death Metal.

BBC quoted Julien Pierce, a journalist who was at the concert, as saying: “Several armed men came in. Two or three men, not wearing masks, had what looked like Kalashnikovs and fired blindly on the crowd.

“It lasted between 10 to 15 minutes. It was extremely violent and there was panic. The attackers had enough time to reload at least three times. They were very young… There were bodies everywhere.”

At the football stadium, people heard outside two big bangs in the first half of the match and a smaller explosion in the second half. No one died.

The carnage came as France, a member of the US-led coalition combating the Islamic State, struck the group’s strategic targets this week.