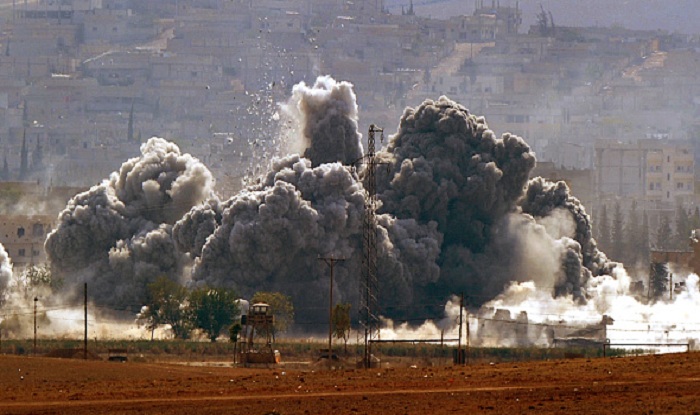 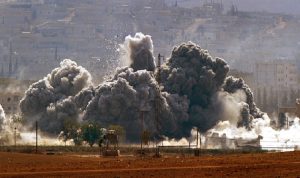 Damascus: One of the worst chemical bombings in Syria that killed at least 20 innocent children and 50 other persons, sparked an international outrage on Wednesday and prompted the United Nations to call for a probe into the attack and to view it as a possible war crime.

The UN Commission of Inquiry on Syria said in a statement the use of chemical weapons as well as any deliberate targeting of medical facilities “would amount to war crimes and serious violations of human rights law”.

“It is imperative for perpetrators of such attacks to be identified and held accountable,” said the independent panel led by Brazilian expert Paulo Pinheiro.

World leaders, including President Trump, blamed the Syrian government of President Bashar al-Assad for the attack and called on Russia and Iran to prevent a recurrence of what Trump termed a “heinous” act that “cannot be ignored by the civilised world”.

Late on Tuesday, Britain, France and the US were pushing the UN Security Council to adopt a resolution that condemns the attack and orders the Syrian government to provide all flight logs, flight plans and names of commanders in charge of air operations, including those for Tuesday, to international investigators.

The draft resolution, negotiated among diplomats from the three countries, was later circulated to all 15 members of the UN Council. It could come up for a vote later.

Victims died — some writhing, choking, gasping or foaming at the mouth — after breathing in poison that possibly contained a nerve agent or other outlawed chemicals, according to witnesses, doctors and rescue workers.

They said the toxic substance spread after warplanes dropped bombs early on Tuesday. Some rescue workers became ill and collapsed from proximity to the dead.

The opposition-run Health Department in Idlib province, where the attack took place, said 69 people had died. It provided a list of their dead. The dead were still being identified, and some humanitarian groups said as many as 100 had died.

The Assad government, which renounced chemical weapons nearly four years ago after a large chemical attack that American intelligence agencies concluded was carried out by his forces, denied that his military had been responsible, as he has done every time such chemical attacks took place in the impoverished Arab country.

The attack would mark the deadliest chemical attack in Syria since sarin nerve gas killed some 1,300 civilians in Ghouta near Damascus in August 2013.

In the aftermath of the Ghouta massacre, a UN team supervised the surrender of Syria’s sarin supplies, the removal of which was supposed to have been completed early in 2014. However, suspicions have remained that a portion of the stockpile was not declared to the UN inspectors.

Russia’s Defence Ministry denied it was responsible, telling the state-run RIA news agency that it carried out no bombing runs in the area.

The Syrian government has repeatedly denied using such weapons in the past. On three previous occasions, though, United Nations investigations have found it guilty of using chemical weapons.

Britain-based monitoring group, the Syrian Observatory for Human Rights, put the latest toll at 72, including 20 children. The monitoring group, which tracks the war through a network of contacts on the ground, was unable to confirm the nature of the substance used.

Tuesday’s attack struck Khan Sheikhun area, where thousands of refugees from the nearby province of Hama live. The town is also on a crossroads between Hama and Idlib and is considered vital to any regime offensive towards the northern city of Idlib.

Idlib is reportedly one of the last bastions of the Islamic State in Syria, and has been subjected to a relentless campaign of aerial bombardment despite a supposed ceasefire brokered this year by Russia and Turkey that was aimed at paving the way for political negotiations.

The raid in Khan Sheikhun indicates Assad’s growing confidence. He has wrested control of territory from the rebels, including the entire city of Aleppo, in recent months.

His regime has benefited from the unflinching support of Moscow and Shia militias backed by Iran, as well as waning support for the opposition by its allies in the region and the new US administration.