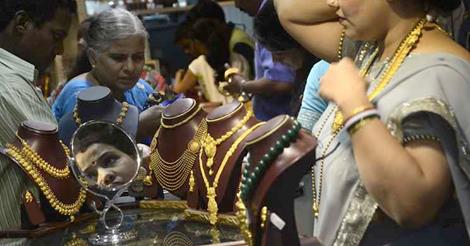 New Delhi, April 21 (IANS) To usher in good fortune in their lives on Akshaya Tritiya, buyers flocked jewellery shops on Tuesday, as retailers witnessed brisk sales of gold and jewellery that may be around 25 percent higher than a normal day.
Akshaya Tritiya, an auspicious day for Hindus and Jains, is believed to bring good luck and success in whatever endeavour one undertakes on this day. It is considered auspicious to bring home gold on this day.
“Kalyan Jewellers registered 30 percent growth in gold jewellery sales this Akshaya Tritiya compared with last year, as there is a positive consumer sentiment due to stable gold prices hovering around the Rs.27,000 mark for 10 grams, supported by global fundamentals,” Ramesh Kalyanaraman, executive director, marketing & operations, Kalyan Jewellers, said.
“Gold prices have declined by nearly 10 percent from a year earlier. We have seen robust increase in all our categories including chains, bangles and rings,” he added.
“Sales have been good post-afternoon as customers made a beeline to our showroom and bought ornaments off the shelf or collected items they ordered earlier,” Deepak Jain, a partner in Dhanalakshmi Jewellers in Bengaluru, told IANS.
He said the sales would certainly go up 30 percent over Monday and 35 percent over April 15, when purchase of the yellow and silver metals began for Tritiya.
“The market is looking very positive. It is much better than previous year. There is a positive economic sentiment. The buyers have confidence on price,” Somasundaram P.R., managing director, India, World Gold Council, told IANS.
Pankaj Parekh, vice-chairman of Gems & Jewellery Export Promotion Council, told IANS that sales are expected to be higher across the country as in March the import of yellow metal was on the higher side.
According to reports, India’s gold imports more than doubled to 125 tonnes in March from 60 tonnes in the same period a year ago.
Apart from gold, jewellers also saw good demand for diamond jewellery.
“This year the sales of diamond jewellery have surged and this trend will continue in the coming years. There has been a consistent growth of 15 percent recorded over the previous year,” Sachin Jain, president, Forevermark India, told IANS.
“The transparency with regards to purchase of diamonds has played a significant role in influencing the consumers,” he said.
“End of the day, we expect 10 percent sales increase in jewellery sales and 20 percent increase in gold coin sales for investment purposes. Compared to yesterday a normal day the foot fall will be three times more,” N. Anantha Padmanabhan, managing director of NAC Jewellers, told IANS in Chennai.
“In quantity terms, we hope to log 10 percent sales growth. Comparing last year’s bill size with the current year’s may not be appropriate as last year the metal price was high compared to current year’s prices,” he added.
In the national capital, gold price was hovering around Rs.27,000 per 10 grams on Tuesday.
“We are seeing good footfalls today (Tuesday),” Rahul Gupta, director of P.P. Jewellers in Delhi, told IANS.
Leading gold and jewellery showrooms in Bengaluru, including Navarathan, Bheema, Lalithaa, Titan, Krishnaiah Chetty, Gitanjali Jewels, D’damas, Joyalukkas and Nakshatra, lured customers with attractive discounts and freebies.
“We are offering 20 percent discount on purchase of gold items between Rs.10,000 and Rs.50,000 and 25 percent discount on purchase of Rs.50,000 and above,” a sales executive of Gitanjali Jewels told IANS.
With diamonds becoming popular among the upwardly mobile and youth, many retail outlets selling the sparkling rocks are offering free gold coins of 2-5 grams or 25 grams silver coin or item for purchase of one carat diamond.
Jewellers in Mumbai reported brisk sale in gold jewellery on the auspicious occasion of Akshaya Tritiya on Tuesday.
“Pure gold biscuits (24 ct) are priced at Rs.27,999 per tola while 22 ct gold jewellery is going at Rs.26,500. By evening, our members have reported positive trends and sales continue to be brisk,” Mumbai Jewellers Federation president Rakesh Shetty said.
He said the preference was mainly for small gold jewellery like rings, earrings and chains, with some opting for bangles and heavy chains, too, and occasional pure gold biscuits also being picked up by customers making a token investment to mark the auspicious day.
Shetty estimated an increase of around 25-30 percent in gold sales on Tuesday, though a part of the offtake includes advance orders for special occasions like marriages, but he said the final figures would be available only later.
“Prices have remained stable over the week and there has been an increased shift in people opting for lighter variants of gold,” said Anil Jain, vice president – marketing, PC Chandra Group, said in Kolkata.
“We have Goldlites, a contemporary daily use product where there has been a significant rise in demand over this week,” he added. “We are optimist about the market considering the stability in gold prices.”
“This Akshay Tritiya has been exceptionally great for online jewellery portals. We are positive that the day will end at a very high note for all online jewellers,” Vishwas Shringi, director and founder, Voylla.com, said.