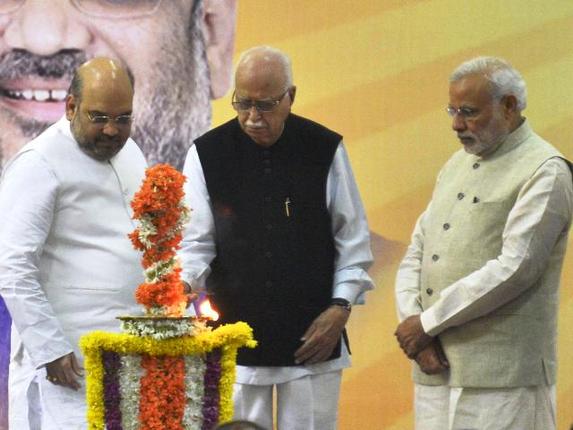 Bengaluru, April 3 (IANS) The Bharatiya Janata Party, which stormed to power nationally last year, on Friday, expressed confidence that it will rule India for 10 to 20 years.
The meeting of the national executive of BJP, first since it came into power, started with president Amit Shah saying they have changed the polity of the country.
“This government has arrived,” Shah said to thunderous applause at the two-day meet, addressing 330 delegates including Prime Minister Narendra Modi. “The BJP will be in power for the next 10-20 years.”
He also congratulated party workers for the massive success of its membership drive, saying that the figures now are over 9 crore 25 lakh, and moving towards 10 crore.
While achievements of the government in last 10 months remained the highlight, the BJP president also presented the next target for the party – winning assembly polls in Bihar.
Prime Minister Narendra Modi, speaking at a public rally later, took upon Congress, which led former United Progressive Alliance (UPA) government, and said they might have had similar policies, but did not have intention to do anything good.
“Whatever your policy, your intention was not right, ours is. Hence we have gone ahead in the race of development,” he said.
Modi did not name Congress during his over hour long speech but attacked the party repeatedly. He said his government was taking quick decisions to ensure faster economic development of the country.
The prime minister promised ending corruption, and bringing back black money sent out while stopping its generation in the country.
At the meet, the BJP lauded the foreign policy of the government, bringing “Bharat” at the helm of world affairs.
The resolution said government under Modi has “moved with speed and resolve on a scale rarely seen in our external engagement, to restore Bharat’s position in international affairs and rebuild partnerships” across the world, with the prime minister and the external affairs minister together engaging with 94 countries in the 10 months since the government was formed.
BJP insiders said the success of foreign policy initiatives is all the more important as opposition had repeatedly said in the run-up to the Lok Sabha poll that Modi will not be accepted internationally.
The resolution attached the foreign policy to security as well as economy, and External Affairs Minister Sushma Swaraj was lauded for all the recent evacuation operations undertaken.
Earlier in the day, party leader and union minister Prakash Javadekar pointed out that besides ruling world’s largest democracy, the BJP was in power in a dozen states — “including eight states where we are in power on our own and four in alliance with our partners”.
In his speech, Shah played down the BJP’s shock defeat in Delhi in February but quickly added the party’s Delhi unit needs to revive itself.
“The party president said we have had successes, and one failure in Delhi is not a big deal,” Javadekar quoted Shah as saying.
“He said such things happen. We should not get arrogant after victory and desperate after defeat.”
The Aam Aadmi Party routed the BJP in the February assembly election, winning 67 of the 70 seats. The BJP, which won 31 seats in 2013, could bag only three seats.
Talking about upcoming assembly polls in Bihar, Shah said the “jungle raj” was back in the state since the Janata Dal-United (JD-U) broke away from the BJP and set the party’s sights on winning the assembly election due later this year.