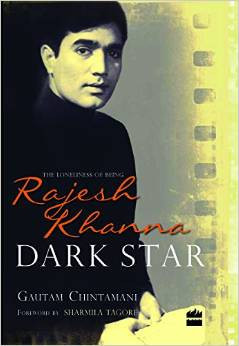 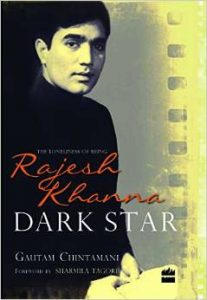 If there were ever a life meant to be a book, few could stake a claim as strong as Rajesh Khanna, popularly known as Kaka. Born in a time when film stars were truly larger than life, Kaka was destined to become not just any film star but the one for whom the term ‘superstar’ was coined. Born Jatin Khanna to middle – class parents, the actor was adopted by rich relatives who bought him up like a prince. By the time he won the Filmfare – United Producers Combine Talent Contest, he was already famous for being that struggler who drove an imported sports car. With seventeen blockbuster hits in succession and mass adulation rarely seen ever before or since, the world was at Khanna’s feet. And then in matter of months it all changed. Mirroring the meteoric rise, Khanna’s career hit a downward spiral just three years after Aradhana (1969) and never really recovered.
The author, Gautam Chintamani’s elegantly written and extensively researched book, Dark Star: The Loneliness of Being Rajesh Khanna, is an aching reminder of the man behind the facade. Despite being deprived of his primary source (the actor died before Chintamani started writing the book and his famously private widow, Dimple, did not oblige him with any information), the author paints a startling portrait of a star in terminal decline. Whether he is handing a half-lit cigarette to writer Gulshan Nanda to hold while he completes a shot or refusing to accompany the cast to a local collector’s home even though one of his most generous patrons and long-time director friend, Shakti Samanta, wants him to, Khanna is a classic case of a man who believed he was God. This title has an excellent foreword written by his beautiful co-star, Sharmila Tagore, and the whole biography has been dived into sixteen chapters.

Reviewed By: Dr. Rajwant Singh Chilana
Associate Professor Emeritus (University of Illinois, USA)
To find out more about these books write to Dr. Chilana at info@indiabookworld.ca