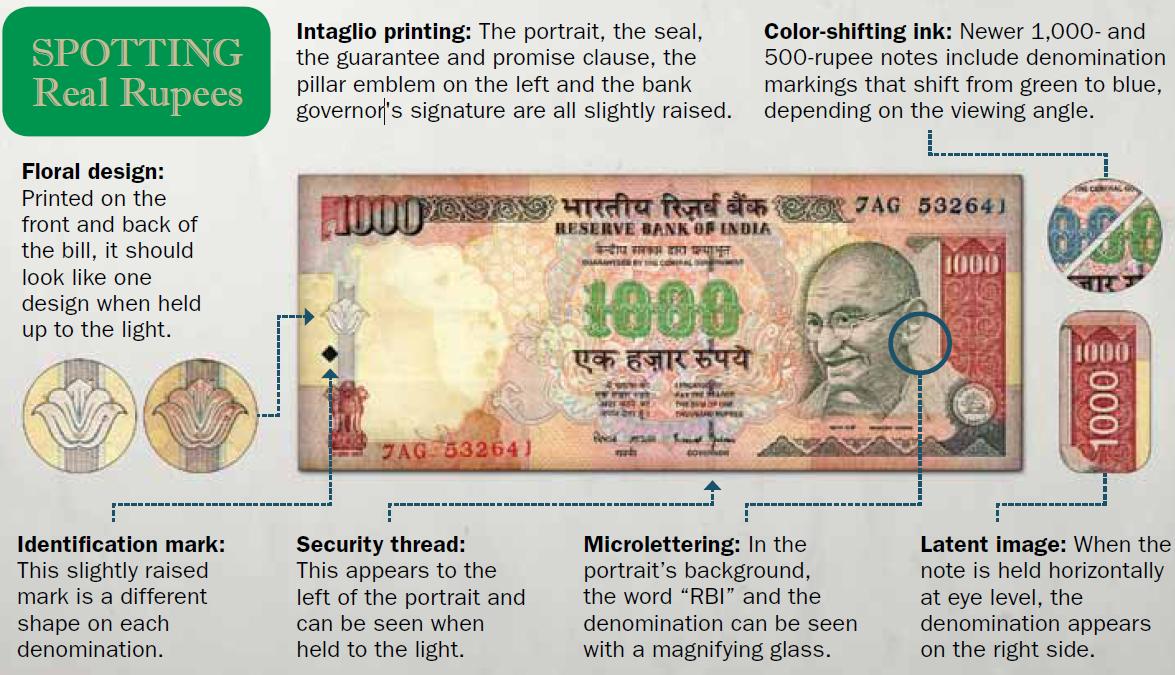 New Delhi, March 15 (IANS) It may be even more difficult for you to identify a genuine 500-rupee note from a counterfeit one as the currency being smuggled into India by inimical agencies is now a closer imitation of the original, Delhi Police have cautioned.
Officers of the Delhi Police Special Cell point to the role of Pakistan’s Inter-Services Intelligence (ISI) agency in pushing through notes which have a greater resemblance to India’s high denomination Rs.500 and Rs.1,000 notes.
The officers said that they have been noticing for the past few months that differences between genuine and counterfeit notes were reducing and that around five such differences have actually disappeared.
“The paper being used to make the fake notes is now more similar. The stiffness is almost the same. The security thread (in the right half) on fake notes also resembles that on the genuine currency.
“The watermark (the portrait of Mahatma Gandhi in light and shade) has also been nearly matched,” an officer, who did not want to be named, told IANS.
“The identification mark on the left of the note looks quite similar in counterfeit and genuine notes. The Optical variable ink also looks similar,” he added.
The officer said that despite vigil by security agencies, attempts to push counterfeit notes into India had been continuing for several years and are aimed at damaging the economy.
“The ISI has developed high quality Fake Indian Currency Notes (FICN) and is pumping these into India with the help of several syndicates. These notes are similar to the genuine ones and it is not easy for the common man to detect them, Deputy Commissioner of Police (Special Cell) Sanjeev Yadav told IANS.
“The security features on the fake notes can only be enabled on highly sophisticated machines that only the Pakistan government owns,” said an officer, who has been part of a team making seizures in the capital.
He said that though a note still has features which have not been matched, it now requires much more than a cursory look to detect a counterfeit.
“There seems to be a constant attempt by hostile elements to make the fake currency look like the real one,” the officer said.
Intelligence agencies are worried that despite some traditional routes of FICN smuggling being neutralised, the flow of counterfeit currency has not slowed.
Delhi Police seized over 7.5 crore counterfeit notes in 2014. At least 5.66 crore such notes were seized in Delhi in 2013 and 2.25 crore in 2012.
Another Delhi Police officer, who has nabbed counterfeit suppliers, said there were several operatives involved, particularly in northern India, and Delhi appears to have emerged as an important destination for the circulation of counterfeit currency.
“It is easier to push fake notes in Delhi because of the huge number of cash transactions that take place in the capital every day,” he said.
Lashkar-e-Taiba (LeT) operative Abdul Karim Tunda – who was arrested in August 2013 from an area on the Indo-Nepal border – had also revealed that ISI ran almost the entire supply chain of FICN being smuggled into India.
Tunda’s questioning also revealed that notes are pushed into India via the Indo-Pak border, the Indo-Nepal border and the Indo-Bangladesh border with help of several syndicates.
“The traditional route is the Indo-Pak border and several means are employed, including travel by road,” Special Commissioner of Police (Special Cell) S.N. Srivastava told IANS.
He said FICN is also sent to Nepal or Bangladesh from Pakistan and then smuggled into India.
Srivastava said counterfeit currency is also sent through the air route via Bangladesh, China, Holland, Malaysia, Nepal, Singapore, Sri Lanka, Thailand and the United Arab Emirates.
An officer said that Iqbal Kana, 53, a Pakistan-based garment and cosmetics trader, is the biggest dealer of counterfeit currency and the top boss of all the syndicates smuggling notes into India.
He said that Kana hails from Muzaffarnagar in Uttar Pradesh and is wanted in several cases by the CBI, the Delhi Police and the police forces of some other states.
Kana started smuggling FICN in 1993, the officer added.
Apart from Kana, Hanif Musa, Aslam Shera, Marfani, Irshad, Fazlu, Mohammed Ali, Aslam Choudhary, Hasan and Abdul Salam are among those who send counterfeit notes from Pakistan to their associates in India.
These suppliers have been using a network of agents to push counterfeit notes into India, the officer said, adding that Tunda was among the couriers used.