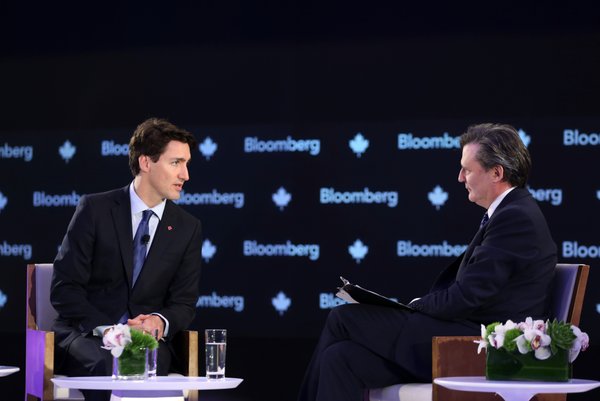 NEW YORK: Justin Trudeau has been tiptoeing around the edges of the presidential election before American audiences, without quite immersing his toe in U.S. political commentary.

The prime minister has been asked repeatedly during his visits to Washington and New York what he thinks of the Donald Trump phenomenon and he hasn’t directly mentioned the billionaire’s name.

He curtly told a news conference at the United Nations yesterday that he had faith in the better angels of Americans’ nature, noting he was paraphrasing Abraham Lincoln.

Later in the evening he told a friendly high-powered crowd in the ballroom of the Waldorf Astoria hotel that he’d only been able to introduce policies like a gender-parity cabinet and welcoming refugees because voters had supported his approach to politics.

“As much as I was able to do, and my government was able to do, we only did it because Canadians made a choice: to choose a more open, fair, positive way of doing politics,” he told the crowd, which included the heads of McDonald’s, Campbell Soup, Shell, and the Carnival Corporation.

Then he added: “That is certainly something that I hope resonates through political systems around the world.”

That last line prompted laughter and perhaps his loudest applause of the evening _ louder even than his references to the gender-parity cabinet, which is why he was invited to the gala and given the award from the women’s group Catalyst.

Amid the claps, he added: “I’m not thinking of any place in particular!”

Several former Canadian ambassadors to the U.S. have publicly warned the prime minister not to talk about the U.S. election, saying it would be a mistake to turn Canada into an issue in a messy election.

But he keeps getting asked _ and he insists he’d work with whoever Americans elect, while sometimes sprinkling that with an allusion to the better angels of Americans’ nature.

There will almost certainly be more oblique references to the Republican frontrunner today.

There appeared to be another reference to the U.S. election during his meeting yesterday with Laurence Fink, the powerful head of world-leading asset manager BlackRock.

“I think the opportunity for Canada in the short run is good,” Fink said.

“A lot of confusion here in this country in investing. There’s probably even greater opportunities in the stable environment of Canada.”

Most of the leading presidential candidates have opposed the new Trans-Pacific Partnership trade deal, and Trump has also spoken about ripping up NAFTA.