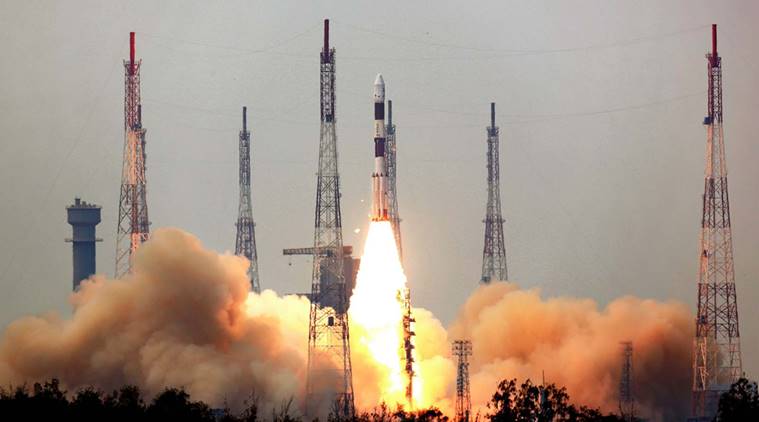 Sriharikota (Andhra Pradesh): India on Wednesday successfully put into orbit its own Cartosat earth observation satellite and 19 other satellites, including one belonging to the Google company Terra Bella.

With this India successfully completed yet another multiple satellite launch in a single rocket mission.

Exactly at 9.26 a.m. the PSLV rocket standing 44.4 metres tall and weighing 320 tonne tore into the morning skies with fierce orange flames at its tail.

Gathering speed every second the rocket raced towards the heavens amidst the cheers of the ISRO officials and the media team assembled at the rocket port here.

Just over 17 minutes into the flight, the PSLV rocket ejected Cartosat at an altitude of around 515 km.

It was followed by the two other Indian satellites – the 1.5 kg Sathyabamasat from Sathyabama University that would collect data on green house gases and the 1 kg Swayam satellite from College of Engineering, Pune, to provide point-to-point messaging services to the HAM radio community.

Soon the other satellites were put into orbit.

It was the first time that ISRO launched 20 satellites with one rocket.

In 2008, the ISRO had launched 10 satellites with the PSLV rocket.

With the success of Wednesday’s rocket mission, India has successfully launched 74 satellites for international customers.

Congratulating the ISRO scientists, President Pranab Mukherjee said: “I understand that images received from the Cartosat-2 satellite will be useful in providing scene-specific spot imagery that can be used for detailed mapping and other cartographic applications as well as applications in Land Information System (LIS) and Geographical Information System (GIS).”

“The fact that of the 20, 17 satellites belonged to foreign vendors, including that from the US and Google, speaks volumes about the leaps in progression that ISRO has taken since its inception in 1960s,” Congress President Sonia Gandhi said, and extended her good wishes to ISRO Chairman Kumar.

The PSLV’s main cargo was India’s 725.5 kg Cartosat-2 series satellite for earth observation with a design life of five years.

This satellite is similar to the earlier Cartosat-2, 2A and 2B.

The other 19 satellites weighing totally around 560 kg are from US, Canada, Germany and Indonesia as well as one satellite each from Chennai’s Sathyabama University and College of Engineering, Pune.

The entire mission was over in around 26 minutes.

According to ISRO, the 110 kg SkySat Gen2-1 belonging to Terra Bella, a Google company, is a small earth imaging satellite capable of capturing sub-metre resolution imagery and high definition video.

The Planet Lab’s Dove Satellites are also earth imaging satellites. A total of 12 Dove satellites each weighing 4.7 kg were carried in this mission inside three QuadPack dispensers, ISRO said.

“We are in discussions with Planet Labs and other companies for the launch of their satellites,” S. Rakesh, Director, ISRO Propulsion Centre and Chairman-cum-Managing Director of Antrix Corporation told reporters here after the launch.

Antrix Corporation is the commercial arm of the Indian Space Research Organisation (ISRO).

Both the companies – Terra Bella and Planet Labs – have plans to launch a series of satellites.

The Indian rocket also put into orbit the 85 kg M3MSat from Canada. The technology demonstration mission is jointly funded and managed by Defence Research and Development Canada and the Canadian Space Agency.

The other satellites that were launched are: 120 kg LAPSN-A3 of Indonesia, the 130 kg BIROS from German Aerospace Centre, Germany and the 25.5 kg GHGSat-D, Canada.

Soon after the Cartosat was put into orbit its two solar arrays were deployed automatically and ISRO’s Telemetry, Tracking and Command Network (ISTRAC) at Bengaluru took over the control of the satellite.

In the coming days, the satellite will be brought to its final operational configuration following which it will begin to provide remote sensing services using its panchromatic (black and white) and multispectral (colour) cameras.

“We can’t take the private company’s approach. There has to be certain minimum requirements for our government needs,” he added.

Kumar said as per estimation around 70 satellites are needed to be put into orbit over the next five years.

Asked about the need for a third launch pad to increase the launch frequency, Kumar said the space agency is building a new vehicle/rocket assembly building that would speed up the assembling of rockets.

“Once the existing bottlenecks are removed and if there is a need for new facilities we will go for that,” Kumar added.

According to him, the next PSLV rocket will put into orbit a weather monitoring and forecasting satellite Scatsat.

He said the South East Asian satellite built by India is likely to be launched between December 2016-March 2017.

On India’s plans to have a space station of its own, Kumar said it depends on the long term plan of ISRO, the funding received from the government and other aspects.