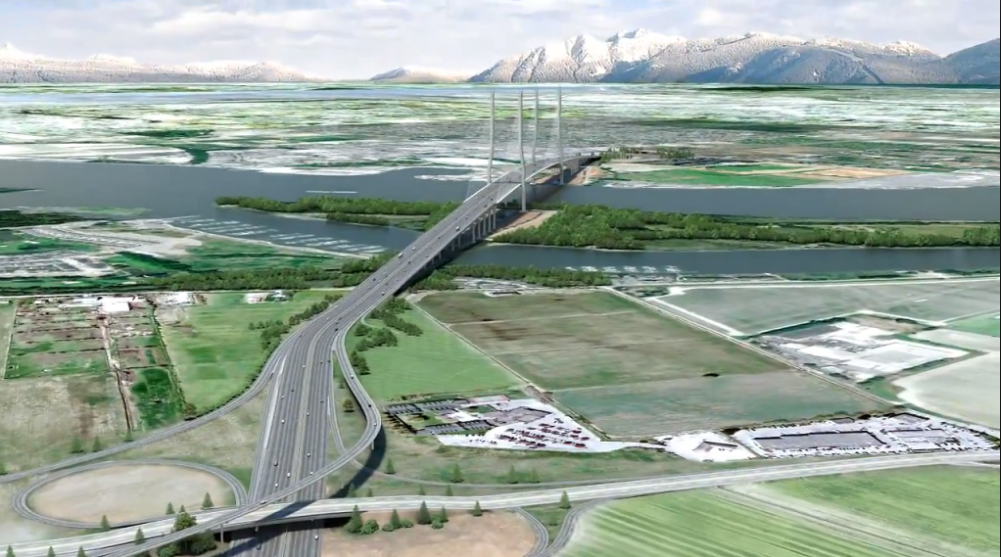 With the announcement this week that the provincial government is moving ahead with the development of the Massey Tunnel replacement bridge, Metro Vancouver Chair, Greg Moore, Mayor of Port Coquitlam, yesterday announced that the mayors of Metro Vancouver were opposed to the project.  Along with a list of concerns, ranging from claims it doesn’t fit with regional planning to interfering with water and sewer mains, he cited a lack of consultation.

Delta Mayor, Lois Jackson, dismissed the contention that there was insufficient consultation saying there were “three public rounds of engagement with a thousand participants in Richmond, Delta and Surrey” which she said seems to have been disregarded.  She further said that the Mayor’s council was not unanimous in its opposition, that there were “four votes in favour”.

“The vast majority of detractors of this project, let’s say, are benefactors of some fairly significant transportation infrastructure upgrades over the last several years,” said the MLA for North Delta.  “I think that the south of the Fraser region has been woefully underserved when it comes to the transportation network, both rapid transit and bridge infrastructure combined and it’s time we took a good solid look at how important it is to move people and commerce around this region.”

Hamilton noted that Metro Vancouver Chair, Greg Moore said they were not opposed to the new crossing “but seemed to want to replace it with a four-lane bridge which doesn’t make a whole lot of sense.”
“We need to be able to think far enough ahead where we’re not just going to service single o

ccupancy vehicles,” said Hamilton, “but capacity for more rapid transit, which this bridge represents, including the approaches with several miles of high occupancy vehicle lanes.”

“This is a project I’m fully in support of,” concluded Hamilton, “and our Mayor is solidly behind it and ripped into the mayors pretty well after they took their position yesterday.  I’m happy as well with the support of the Delta and Richmond Chambers of Commerce and the Surrey and Vancouver Boards of Trade.”

Todd Stone, the Minister of Transportation and Infrastructure also responded to the Metro Vancouver comments.

“A bridge will remove what is currently the worst traffic bottleneck in B.C. and eliminate over one million hours of vehicle idling each year – improving air quality in the region and cutting down on the greenhouse emissions churned out by the idling cars. The project will include 200

lane-kilometres of new, improved and rehabilitated highway to relieve congestion. And it will offer a more direct bus service with 50 kilometers of new dedicated HOV and bus lanes with better connections into TransLink networks and to the Canada Line.

Addressing the statements presented by Moore, Stone said,   “Metro Vancouver incorrectly suggests that by building this vitally important new bridge, we are ignoring transit improvements in the region.

We have been very clear on this point: we are investing in both road infrastructure and transit upgrades.

“Regarding public consultations, the Province has led three rounds of detailed consultation over the last four years, receiving and incorporating feedback from thousands of British Columbians, First Nations and stakeholder groups into our planning process.

“Metro Vancouver has been fully engaged in this project since it was first announced in 2012. Since then, the project team has had more than 30 meetings with Metro Vancouver and Metro Vancouver Parks. Metro Vancouver is also an active participant as a member of the EAO’s technical working group on the project. This working group includes federal and provincial agencies, Aboriginal groups and other local governments. As we have on every step of this process, we will continue to work with all of our partners to find ways to make this project better for the people it serves and to ensure it is done in the most environmentally friendly way possible.

“The George Massey Tunnel replacement project represents a significant investment in the people and economy of the Lower Mainland. Its benefits – safety, transit, environmental and added capacity – will be felt well beyond the region.

“Simply put, for those who rely on this corridor and use it daily, the crossing is too important to do nothing.”