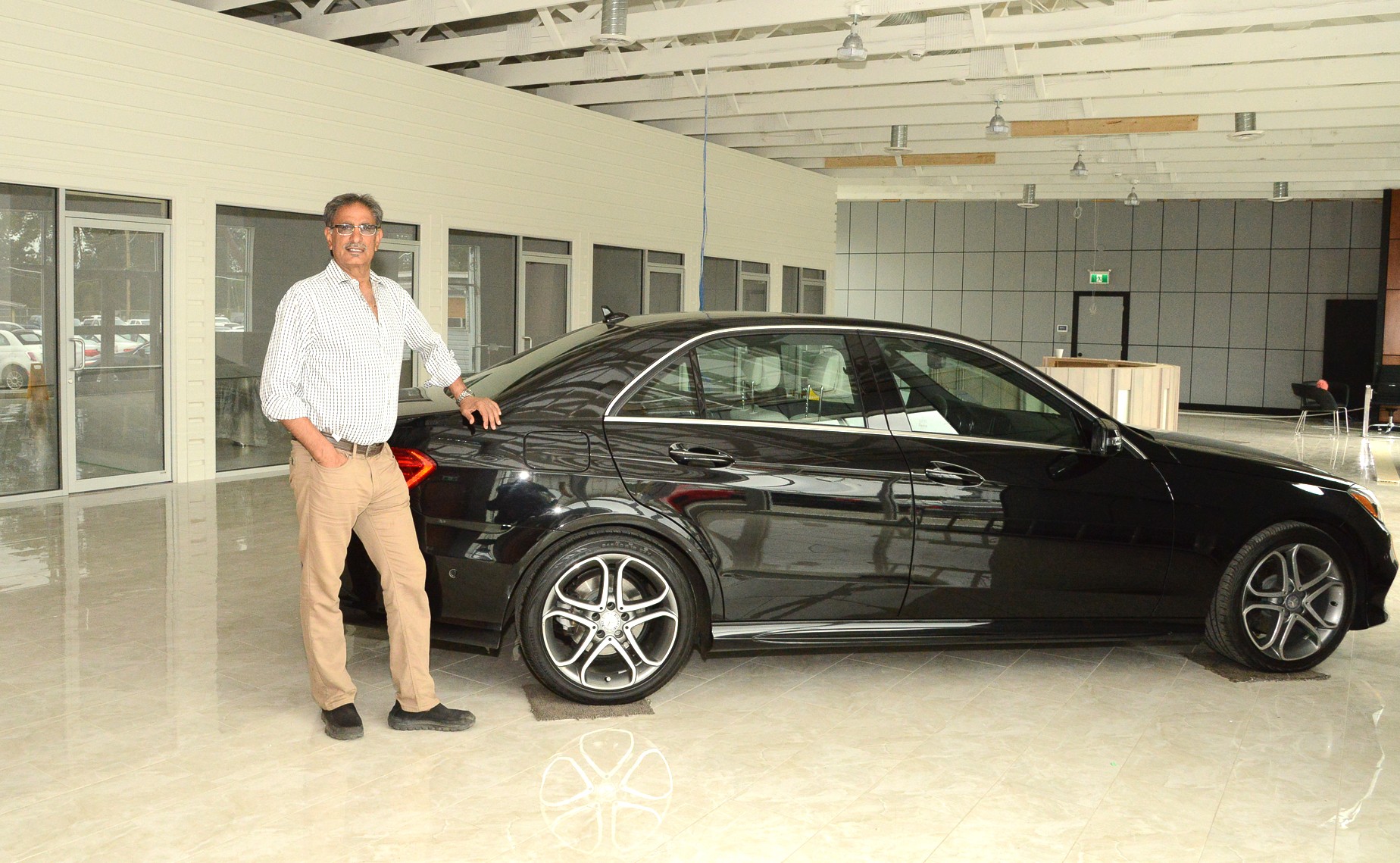 Surrey: “I’m building a new showroom, which will be ready to open in three to four weeks, where we can showcase four to five cars inside,” said the proud owner, and President of Hare Motors, Ajit Hare. “Then I will demolish these old buildings, and I will be the first used car dealer around here with a proper show room.”
Hare shows the new facility with pride as the result of a business built, combining his love of the industry, and a desire to help people who come to Canada, and have to start with no credit history.
“I’ve been in the car business for something around forty years,” said Ajit Hare, describing his success in car sales, working for a new car dealer in Richmond for fifteen years.
“I was a grand sales master for fifteen years and I think, 91 or 92, I was number one salesman for all of BC. The car business was good to me,” he said.
Seventeen years ago Hare went on his own, situating his business at the current location on King George Blvd, beside the landmark Turf Hotel.
“I started small and my son joined me about eight years ago. We bought the property at the same time too,” Hare added, “because we also deal quite a bit in properties. This was a big source of our revenue initially. But we‘ve grown and we’re now one of the top used car dealers in Surrey.”
Hare describes the company’s specialty as financing vehicles, keeping people’s payments low, and arranging the least expensive way to get into a car.
“One way we do that is called in-house financing, that is using our own money,” he described. “This is particularly important for people coming new to this country with little or no credit established. We offer them a way to build a credit history, and we promise them that if they stay with us we’ll get the payments done in five or six months. If a person has bad credit, we’ll spend five or six months working with our own money to get them going.”
Hare also expressed an emotional connection with his city. “I’ve been in Surrey since 1975 even though I worked in Richmond. This community has been very good to me and this is a chance to give back.”
His efforts to give back to the community are numerous, from serving on many boards and being an active participant in many community functions.
“I just sponsored a RED FM run for MS last week,” he said. “I sponsor lots of soccer teams, lots of kids and lots of Indian functions.”
As a result of his efforts toward support in the community, as well as the business he has carefully built, they have become well known and have been rewarded with customer loyalty.
“I’d say seventy to eighty percent of our business is repeat business,” Hare says, “which is also good because you’re working with customers you already know.”
The inventory on the lot was predominantly high-end vehicles, Mercedes, Audis, Lexus, BMW and so on. Hare said that the company had been deliberately moving that way.
“Over the past year we’ve been moving more into the high end and specialty vehicles and moving away from the low line cars, and particularly for the last six or seven months we’ve been really building the market with vehicles that nobody else is carrying. That’s why we’ve built that show room to put some nice cars inside. The community is now established and has the money for these cars.”
Hare Motors employs about eighteen people, five of those are just doing finance.
“It’s the thing that is the most work,” said Hare, “and the community knows we’re working with our own money. My brother, Taroo Hare, is working in mortgage lending and is active as a developer, so it’s another reason why we can do the in-house financing.”
Hare was asked about any concerns he had expanding the business in light of plans to replace the Pattullo Bridge, and how it may impact his business location.
“I was concerned enough that along with owning this parcel, I bought the next door parcel when it came for sale, just in case they want to take a small corner of my lot to widen 125th. But since (TransLink) is spending millions to upgrade the bridge, they’re not going to demolish it. Also, to the east of the Turf Hotel, I own an acre and a half. Right now, I’m renting it to two other used car dealers. I think I’ve got enough space here.”
Asked if he thought about picking up a dealership again, now that he is finishing up his new showroom, he considered for a moment and then replied, “ I was thinking about it, but things are pretty good here so why break that.”
Hare Motors Ltd. is at 12375 King George, and is online at www.haremotors.com